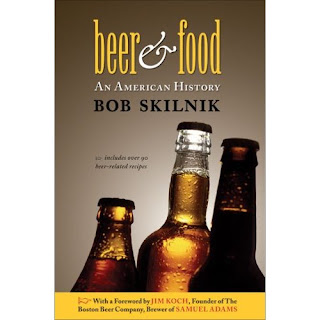 A few weeks ago I went on a bit of a book shopping splurge and bought a few pieces on beer. Hopefully over the course of the next month or so I'll finish them all and write up a couple of reviews. The first book that came was the newest by Bob Skilnik titled Beer & Food: An American History. Before getting into the book, a little about the author. Mr. Skilnik has written a pretty well reviewed book in the past, Beer: A history of Brewing in Chicago. Chicago being near and dear to his heart as that is his residence and where he earned a degree in brewing technology from the Siebel Institute. So he has some pretty good credentials, and as I am fan of beer and food pairing, I was eager to crack open the book.
The basic premise of the book is looking at how beer and food have evolved over American History, both in pairings, but more specifically as an ingredient. I think that the author does a good job of meeting the premise, in an authoritative and entertaining manner. The author does covers much more range than Maureen Ogle's book, starting back in the Colonial days. He starts out showing how the women that brewed the beer used it in their dishes, and stews, sometimes using them as preservatives, due to the use of hops. But more prevantly the author shows how people had to make do using other non traditional ingredients for beer in the new frontier than their British Homes were used to. This manner of showing the state of beer, then food, then giving a smattering of beer infused ingredients continues throughout the book, up until Prohibition, where instead of using beer, ingredient pamphlets were created by struggling brewers emphasizing the use of their Malt extracts. Fascinating if not entirely appetizing approach. The book ends with the craft beer movement and recipes from a good selection of craft brewers using their own beers in various unique ways.
Overall I think this is a good introductory book to beer and food. Some of the recipes were redundant, (sometimes that may have been the authors point) I mean how many stews or Welsh Rarebit recipes does one need? The real treat here were some of the current recipes utilizing today's craft beer's as they seemed to be very thought out.
My recommendation is, if you are interested in beer and food as ingredients, this is a good start, if you are more interested in Beer and food in pairings, seek out Garrett Oliver's much more thorough effort.
Posted by Barleyvine at 7:05 PM

"...if you are more interested in Beer and food in pairings, seek out Garrett Oliver's much more thorough effort."

How can you make this comparison after stating "The basic premise of the book is looking at how beer and food have evolved over American History, both in pairings, but more specifically as an ingredient. I think that the author does a good job of meeting the premise, in an authoritative and entertaining manner."

Oliver's book is a book of contemporary food comparisons. Beer & Food is a look at how food and beer have evolved together in America's culinary history.

You're comparing apples to oranges.

Bob,
In a sense that is my point. If you are looking for a book about paring beer and food, I do think Oliver's is the book to go from. However, if you are looking at beer and food from a historical perspective, and more of an ingredient vs. pairings then Beer and Food is a good resource. If that is not clear, my apologies.