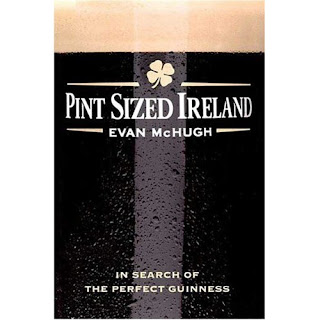 The title of this book by Australian Evan McHugh doesn't initially sound like much a beer book, but its the subtitle where the joy lies 'In Search of the Perfect Guiness.' While there are many craft beer lovers that turn their nose up at this dark bitter liquid, it has opened many novice beer drinkers to the fact that there is something else to drink than yellow colored water so it deserves a better place than most give it.
This book as stated on the jacket is part travel guide, part beer lovers diary. I couldn't agree more. Evan and his future wife travel around Ireland in search of the Perfect Guiness, from Dublin and the Guiness brewery to Westport on the West coast of Ireland and on up to Belfast the capital of Northern Ireland. The book is full of raucous tales and rather hilarious stories of his time in pubs with locals and other fellow travellers from Italy, Germany and other places that they met along the way. It is a great book, and I'd love to take it along to me if I ever get to go to Ireland, trying to match pace, visiting some of the pubs mentioned. If I could compare it to one book I have read it would be Travels with Barley by Ken Wells. The focus here is not drinking any beer, or Guiness specifically, but more about being in a Pub with friends (spoiler alert: that's a hint to where the Perfect Guiness really is). I think its something we miss here in the states where a Pub Culture is all but nonexistant, alas thats a post for another day. In the mean time this wouldn't be a bad book to read.
Posted by Barleyvine at 3:45 PM