A tale of two magazines 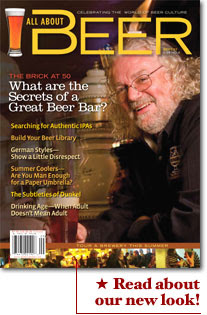 A couple of days ago I was all set to write a post about what I thought was a pretty good magazine on beer, Draft. Of course some bloggers have pointed out that this isn't all that good of a magazine and sure it has its short comings, but I thought it was pretty good. My attitude changed this past weekend when my eyes caught hold of the newly renovated All About Beer Magazine. Now most beer aficionados know of this magazine, however, it was the first time I have seen it in my area. Having heard so much about it, I picked it up and couldn't be happier.
Here are just a few of the things I liked about it:
All in all, I felt this was an incredibly easy read, good interviews with brewers and a fun look at news bits. They ave a great selection of writers, from Rick Lyke to Charlie Papazian and many others.
My nits are minor and consistent with my gripes for other magazines. The Activity Calendar is already out of date by the time the magazine comes to print. If magazines are going to put these things out, they need to do a better job of making them relevant. This magazine has now become a monthly pick up for me as its one of the few beer mag's that I have access to down in Houston. Unfortunately no Beer Advocate. I am thinking of writing another post on why Draft is no longer my favorite, maybe later this week.
Posted by Barleyvine at 5:27 PM

I totally agree. This new issue was excellent - better writing, and WAY better look to it.