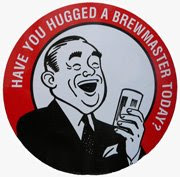 July 18th, today has been decreed to be International Brewer's day. An unofficial (and hopefully some day soon official) holiday to celebrate those great and wonderful artists that create the drink we love and are so passionate about. International Brewers Day (henceforth IBD) is the brain child of Jay Brookston. This day is used to celebrate brewer's and the idea is for beer bloggers like me and many others to participate by profiling, interviewing, talking about, etc brewers. July 18th was chosen as the date because its the feast day for Saint Arnold of , the patron saint of brewers. If you want more information head over to the IBD's website.
When I first heard about this, I got really excited because I thought it would be a great excuse to get to know a local brewer a little better and to write about the beer he creates and that I enjoy so much, it also didn't help the date for this was July 18th.
It should be obvious by now that I'm profiling Saint Arnold Brewing Company and specifically its owner Brock Wagner. With it being the local brewery in (for a while the only one in the area) I've written a lot about Saint Arnolds in the past couple of years on the blog. For good reason, they are a great brewery and more important good folks.
Let me start by giving folks a little background on how I became introduced to their beer. I went to school in where I drank mostly Shiner and Abita,both good solid beers. When I moved to I was trying to find a good local beer, and one day my then girlfriend (now wife) took me to the Saturday tour at Saint Arnold's. I was instantly hooked. The atmosphere at these tastings is amazing. Everyone standing in line for the free beer, then sitting down communal style on these long long benches, talking not only with your own group but everyone around you sharing experiences, and of course food, food that you've brought from home, from the grocery store, or pizza place etc. It's one big family atmosphere. I thought to myself then that this was a pretty cool deal. Well needless to say I've been back numerous times even in the heat of the summer (no AC!!!!).
Another neat thing about the tour is looking at the wall by the long bar and seeing all these letters of thanks from different organizations that Saint Arnold's has helped in some way. They really care about the community there as do many small craft brewers which is one more reason why these folks mean so much to us. Needless to say I think Saint Arnold's is a top notch company so I really wanted to be able to sit down and do an interview with Brock. I'm happy to say that while I didn't have the time to sit down with Brock he was gracious enough to answer numerous questions via email....so with out further ado.
A little introduction to Brock first. He went to college at here in and got into home brewing during his stay. Once he graduated he stayed in and worked as a financial analyst doing corporate finance and mergers & acquisitions, primarily in the oil service industry. At some point his work was getting in the way of his homebrewing and as he says "one of them had to go." Lucky for us kept brewing beer. So time for some questions:
You chose the name Saint Arnold's to celebrate the patron Saint of Brewing correct?
Yes

What got you into Homebrewing in the first place?
The RA in my college at Rice (who also plays trumpet in the Symphony) introduced me to homebrewing. I'd go over to DeFalco's (then next door to the GingerMan) and get my supplies and brew in the dorm.

Whats the most unexpected thing you have noticed being a brewer?
The way women throw themselves at you. That was a joke. The lack of control we have over the selling process. We control brewing the beer, but once it leaves the brewery, it is a challenge to control the process from then on. We work hard trying to do so.

Whats the hardest thing?
Getting people to be aware of us. As a craft brewer, we don't have the money to advertise and our customers don't really seek out beers that way. The result is the only way to make people aware of us is word-of-mouth. This takes years, which is why the first 10 years are such a challenge for most small brewers.

Whats the funnest thing about being a brewer?
Making beer. Really! At the end of the day, drinking exactly the beer that you want, and you made it to boot, is really satisfying. Now for funniest:
Beer is every-man's drink. There are no affectations surrounding it (or at least there shouldn't be.) As a result, people feel a strong connection to our brewery and that we are part of their lives. This leads people to tell you very funny and sometimes personal stories about Saint Arnold drinking experiences. Some of them fall under the "too much information" category!

One of the really great things about Saint Arnold's is its community involvement. I love going to the brewery and checking out the wall with all of the letters of thanks from the folks that you've helped. From working with the Elissa Project to Bayou, you do a lot for the city, why go to all the effort? Do you have a favorite causes? Do you have plans to support any other big causes?
I believe strongly in the community, and in order for the community to be strong, people and businesses need to be involved. We probably do more than we should, but it makes us feel good, so why not? Usually our process is that we look to get involved in things that we like, and then we try to come up with a business rationale. If we succeed (even if it's a stretch), we do it. We plan on doing more things with the Show, partially to support that organization, but more than anything, to make sure that the Art Car Parade is financially healthy. That is a institution that is quite expensive to put on and, surprisingly, doesn't get much support from the City.

So how have those Saturday sessions evolved, from way back in 1994 to now?
They started with 10 to 25 people for the first couple of years. It took about six years to get up to 50 people, then they started exploding. We had over 600 people here last Saturday, and it was hotter than Hades!

I love your every day beers, but your Divine Series is otherwordly, how did the decision to make more extreme beers come about? I know some are made by homebrewers, but what about others?
We just wanted to have fun and brew some beers that we really wanted to make but wasn't sure how large the audience would be for them. Pretty much all of the recipes for our beers are mine, but with the Divine Reserves, the guys here compete to come up with a recipe that we decide to brew up. We don't publicize whose recipe it is, but everybody here knows. For example, when Divine Reserve No. 4 won a gold medal at the World Beer Cup this year, Vince was as giddy as a school girl. Every year one of the Divine Reserve recipes comes from the winner of the Big Batch Brew Bash. That homebrew does get a lot of publicity for winning the competition and having this beer brewed. Also, we enter that beer in the Pro-Am category at the Great American Beer Festival.
You've recently bought new property closer to downtown. Why that property? Was it the location? Size? Price? Or a combination of all three?
It was all three. I wanted to locate the brewery close to town, preferred an older building that had some character, and we were able to afford (sort of) this location.
Besides the obvious expansion to capabilities what other things will having this new place bring?Air-conditioned space for the tours! And more bathrooms. I know it's goofy, but actually owning a place gives a certain feeling of permanence and a greater connection to the city as well.

Any plans to go outside of ? Why or why not?
Not at the moment, but I don't rule it out as a possibility. Traditionally beer has been local. It is best when it is fresh. It is expensive to ship something as heavy as beer. I think we would all be best served if we first and foremost focused on our local communities.

Do you have a favorite Saint Arnold's Brew? if so what is it?

No, I don't have a favorite Saint Arnold beer overall, but any given evening, I certainly will be in the mood for one specific of our beers. With this heat, I have been consuming a lot of Summer Pils, but earlier in the summer it was Elissa. I will often finish the evening with an Amber Ale. And I always long for some Christmas Ale, although not usually when it's in the 90's outside, but I did enjoy having some off of our Christmas in July run. OK, so you see my issue.

If you aren't drinking Saint Arnold's what do you reach for?

There isn't one beer I look for other than Saint Arnold's. If I am someplace that doesn't serve Saint Arnold, I will get whatever the most interesting, flavorful beer there is, but it could be many different beers.

There you have it folks. Thanks so much to Brock for taking the time to answer a few questions. And for everyone else out there, have you hugged your brewmaster today? Happy International Brewer's Day everyone.

Posted by Barleyvine at 4:44 PM