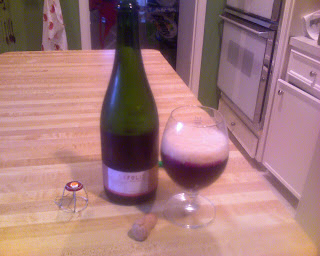 New Belgium is really a pioneer in the craft beer industry. They've been around seemingly forever, and their ubiquitous Fat Tire Ale is available almost everywhere (at least this side of the Mississippi). However as happens a lot of times, New Belgium faces an undeserved backlash because of how big they have gotten. I think its unfair for multiple reasons, one I don't understand why its bad to be successful? Has NB gotten large, yes, but they are still not that big when compared to BMC or even Sam Adams, so whats the problem? There are two other reasons why I think people shouldn't be hard on NB. The first having nothing to do with beer, but with good business practices is that they were one of the first (if not the first) brewery to run off of wind power. They truly are trying to make the world a better place by helping the environment, and keeping their impact on it as small as possible. The second and more beer related reasons is that while their regular line up is solid, I wouldn't call it ground breaking, however their special beers like La Folie, Abbey Grand Cru, Beirre De Mars, Eric's Ale, etc are what being called New Beglium is all about. They are all outstanding beers, some are even ground breaking. One of the first of these is the La Folie a Flanders Red Ale. Before getting into the beer though a bit on the style.
Flanders Red Ale: This a pretty unique style of Belgian beer mostly made in west Flanders. Most of these beers are aged in oak vats. This process of aging in non-sterilized wooden vessels allows the wild yeast on the wood to attack the sugars within the beer. The beer can be aged in this vessels for a pretty long time, sometimes up to two years or more. Once done aging and before final bottling, these beers are usually blended. Older ale with newer ale to help balance out the flavors. By aging the beers in the wooden vats, you can get lactic acid producing bacteria as well as the yeast strain Brettanomyces. All these things can cause different degrees of sourness, earthiness, and funkiness. While not unpleasant, brewers will blend to create balance. What this creates is a well balanced, extremely complex favorable ale that weighs in at around 4.5 to 5.5 %.
Now on to the basic spec's of the style (note these are from the BJCP website): The aroma should be fruity, black cherries, oranges, plums or red currants. You can also get some vanilla or chocolate with potentially strong sour acidic notes. There is little to no hop aroma. The color should be deep red burgundy. The mouthfeel should be medium bodied with low carbonation and flavors of plums, oranges, currants, cherry, vanilla, oak, chocolate, and some acidity and sourness.
The Beer: Ok now to the beer itself. La Folie comes packaged in a 750 ml bottled capped with a champagne cork and cage. The beer weighs 6% and pours a cloudy hazy brown with a good size taupe colored head. The nose is of sour cherries, oak, vanilla, caramel, roasted malts. The mouthfeel is medium bodied with a nice effervescence. Sour apple, cherry, vanilla, oak. Initially its mouth puckering sour, but as it warms up the sourness spreads out, and while still very powerful it is not over whelming. There are spicey notes, of black pepper, caramelly sweetness along with the fruitiness mentioned above. There is a rye bread quality there as well along with some notes of coco. An amazing beer, and a great example that New Belgium can make outstanding ground breaking beers. This gets an A- from me. Here's what the folks at BA had to say.
Posted by Barleyvine at 12:22 PM

Sierra Nevada is a pioneer. NB started about the same time as St. Arnold.

I agree completely that Sierra Nevada is a pioneer, but just becuase NB hasn't been around as long doesn't make them any less pioneering or groundbreaking. NB started in 1991, they are one of the first (if not first) female run breweries, they are employee owned, they really were one of the first (if not the first) brewery to make Belgian Style beers (like their Abbey), well before it was popular, and they were one of the first (again if not the first) brewery to be wind powered. Personally I call all of those things pioneering, especially as you look at how many breweries have followed in their footsteps.

It's not the size that counts, but how you use it. We have to get away from hating on breweries that find financial success. My beer stash is incomplete without at least 3 styles of New Belgium beer at hand. New Belgium is making great session beer and pushing the envelope some, but taking it easy.

They are gaining big acceptance with some swill drinkers, which is all to the good for beering in general. Just like Sam Adams before it.