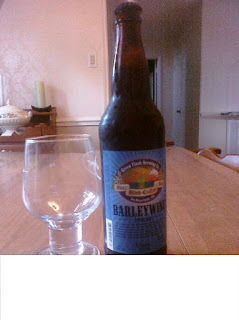 The weather is turning ever so slightly cool here in Houston and that means fall. It means some of my favorite seasonal beers. Octoberfest style marzen's, Pumpkin beers, then as the weather turns even cooler I'll get to winter warmers and barley wines. There are some breweries especially US craft's that release their Barley wines during the summer, these are normally not as malty as English style ones, but hoppier almost like an Imperial IPA. It is with these thoughts that I reached out for this release from San Diego brewery Green Flash. You may remember that I was able to get the 2008 vintage last year and thought it rather delicious so you can imagine my happiness when I saw this years available.
The Beer: This year's vintage weighs in at 10.9% a little more than last years and pours a shady chestnut brown with a quarter inch head of off white almost taupe colored head of foam. The nose is potent, I could smell it well before lifting the glass to my nose. It smelled of toffee and treacle, bread pudding, hops and grapefruit, citrus, figs. Just like last year's I could bury my nose in this all night and never be disappointed. Yet I had to stop if for no other reason than to taste. The taste now that was joy. The mouthfeel is chewy, creamy, tongue coating hops and flavor. Yes hops are at the forefront for this is an American Barleywine after all. Notes of citrus peel, toffee, treacle, breadpudding caramel, sweet malts, fruity estery yeasts. A bitter finish is complimented by an ever so slight not unpleasant alcohol burn. The hops are resiny along the tongue and linger well beyond the finish. It was a great beer tonight with sharp cheddar cheese, and my bets are that this one ages magnificently. This gets a B+ from me.
Posted by Barleyvine at 8:59 PM