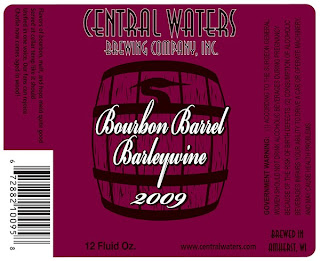 A friend of mine is from the Wisconsin area and over Christmas he was able to visit some of his family. He is also a fellow craft beer lover (as well as an amazing home brewer), so he brought back a slew of beer to share with me. Most of those were New Glaurus beers (posts on those later I promise) but there were some from other WI breweries as well, including this one from Central Waters Brewery out of Amherst, WI.
The Brewery: Before I get to the beer, a couple of notes about the brewery. First just from the initial look at the website you can tell they are not just your ordinary brewery. Like many others (namely New Belgium) they have an intense interest in doing things environmentally friendly and have recently installed 1,000 sq ft of solar cells in addition to other environmental things that they do like radiant floor heating and energy efficient equipment. The brewery started in 1996 in an old Ford Model-A dealership, a few years later however the original owners sold the brewery to the current owners Brewer Paul Graham and a home brewer Clint Schultz. They worked hard to keep not only the solid list of beers already being brewed but to expand into some more interesting offerings. Their list of brew's looks pretty solid, especially the seasonal offerings. Some like the one today are aged in bourbon barrels, however I am unsure of which bourbon.
The Beer: This 2008 GABF Gold medal winner weighs in at 11.5%. It pours a rich amber brown with a medium sized tan colored head. Notes of bourbon, oak, vanilla, caramel, and some nice floral and earthy hops, along with figs, raisins, plums, oh my. The mouth is rich and chewy with little carbonation. Oaky, vanilla, slight notes of bourbon on the finish. Dark fruits like plums and figs. Charred oak is evident as well adding an interesting depth to the beer. Caramel and hints of alcohol show up after another sip. Very malty. As it warms the bourbon flavors become more pronounced along with notes of cherry. Warming it almost becomes sherry like. A wonderful beer that gets a very excited A- from me. Here's what the folks at BA had to say.
Posted by Barleyvine at 7:53 PM