Last night Houston Beer mecca Petrol Station hosted Scottish brewer's Brew Dog. This was not just them coming to Petrol and talking beer. Oh yes they did that, but they also were pouring beers, including two very unique ones: Tactical Nuclear Penguin, and Sink the Bismarck the first weighing in at 36%, the other weighing in at 41%. I've not been kind to these beers because I think they are unnecessary gimmicks, from a brewery that for the most part has a relatively uneven line up of beers. However in fairness to the beer and the brewery I felt that I should make my way up to Petrol Station and try some of these brews. First, about the event. It was really great, there were tons of folks there, many fellow Houston Bloggers, Steve from All good beer, Chris, from Blog of an aspiring foodie, and Cathy host of the amazing and wonderful Beer Camp. Getting through the small crowded space at Petrol was a challenge but I started off with two of the beers that Petrol was pouring from Brew Dog, Hardcore IPA, a really good citrusy, piney IPA, and Paradox on cask, a thick syrupy stout aged in scotch barrels.
Around 8pm it was time for the main event folks started crowding around a table at the front of the bar, suddenly a man in a penguin outfit (sorry for the crappy picture, camera phone and it was dark) stood up on a table and we knew it was time. In a thick Scottish accent head brewer James Watt spoke about the two beers we were about to taste, us? We eagerly reached forward for the first pour of Sink the Bisma 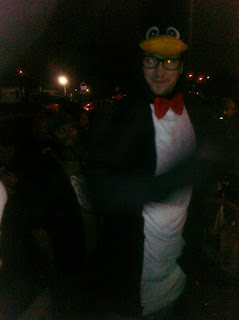 rk, a 41% IPA. Each of us was given very small pours, no more than a few sips each: here are my brief notes: Light amber color, notes of citrus and pine, alcohol burn, the mouthfeel is full bodied, on the tongue there is intense citrusy and piney notes, it tastes like beer, then the liquid makes it to the back of the tongue and down the throat and it BURNS, almost making me cough. Its intense yes, and I sure couldn't drink much of this, but it still tastes like beer, as Steve from All Good Beer said to me, you know where they are going and its a good place, it just needs some time.
After getting that beer down it was time for Tactical Nuclear Penguin a 36% barrel aged beer: This one was much darker, brown, malty notes, sweet caramel, vanilla and oak all on the nose again with some alcohol notes. The mouthfeel is syrupy, malty, but very alcoholic, and very disjointed, it seems to have lost its way, and frankly its not all that good, it has lost its beeryness for lack of a better word.
Surprisingly I rather enjoyed the 41% beer. I still feel that these are complete gimmick beers, and that Brew Dog would be better served creating a solid line up of wonderful beers than spending the time and effort it takes to create these alcoholic monsters. I do respect them for what they have done here, taking beer, amping it up to where they have and still keeping some beer qualities is quite simply amazing.
Posted by Barleyvine at 7:00 AM

Hey, it was good to meet you and the other bloggers last night. See ya Camp Beer II.

Nice write up. One small correction though - Tactical Nuclear Penguin is actually 32%, not 36%. It was delicious anyway.