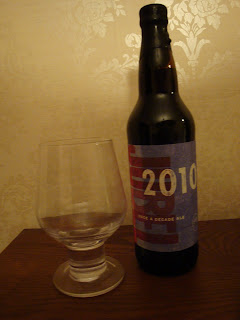 Many brewer's these days put out special once a year ales. Most of these are anniversary beers like Shiner's 100, or 101 beers, others are special cult like ales that folks stand in line for hours to obtain (like Three Floyd's Dark Lord). However Oregon brewer has taken this a step further and has brewed a beer that is released in bottles once a decade. This ale dubbed Jubel has been made just twice, once in 2000, and now it has been released once again. However unlike many other special beers, this one while not easy to find, you didn't have to sell your soul to get. So whats so special about this beer you ask? Well Deschuttes takes their winter seasonal Jubelale, a dark strong ale that has some hops at 60 IBU's and weighs in at 6.7%. Above I mentioned that Jubel is bottled once a decade, however it is available on draft at Deschuttes brew pubs. To create this beer, they've brewed a stronger version of their Christmas ale and aged it in Oregon oak Pinot Noir Barrels. 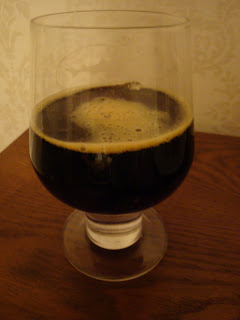 The Beer: This one weighs in at 10.0% and pours a rich dark brown with ruby highlights and a thin line of taupe colored head. The nose is of rich malts, cherry, raisins, figs, plums, and coco. The mouthfeel is thick and chewy. Strong notes of alcohol. Dark Russian bread, fig compote, raisins, prunes, notes of coco, candied sugar, christmas bread, vanilla and oak all show up in the flavor profile. It's an incredibly flavorful beer, with concentrated dried dark fruits as it warms, sticky toffee. This beer is strong, tastes much more than the 10% it is. Alcohol becomes even more prevelent as it warms. Looking at the bottle there is a "best after" date. The date is next year. Glad I got a couple more bottles becuase this one should age wonderfully well.
Posted by Barleyvine at 2:01 PM