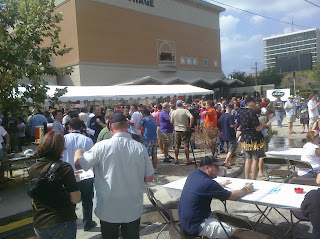 Sunday was the final day of the highly successful Houston Beer Week and you couldn't have asked for a better way to go out than Monsters of Beer. This was an event of Texas Music, Texas Food, and of course Texas Beer. It was a extremely successful 6 hour event with very few hiccups. I'm really impressed by the folks that put this on, the volunteers, and the attendees. Was it perfect? No. Are there things that could go better next year? Of course there are. But for it being year one I thought things went pretty well.
The first thing we noticed when we walked past the giant dragon at the entrance to Monsters of Beer and entered the blocked off area by 13 Celsius was the line-up of 9 breweries where there was supposed to be 10. Unfortunately Ranger Creek Brewing couldn't make it anytime as they were having facility issues. The second thing I noticed was that there was only one food truck when there should have been 3 (Hubcap Grill had their truck vandalized, and Melange Crepes was running late, which left only Sylvia's No Borders Truck), this would of course cause one of the biggest issues but was really beyond the control of the Monsters of Beer folks.
Once we got in line for each brewery you also realized that what was on the handy dandy check off chart was not what was being served so for reference here is what was available from each brewery:
(512) - IPA and Pecan Porter
Live Oak - Pilz and HefeWeisen
Real Ale - Oktoberfest, ESB, and Lost Gold IPA Cask
Southern Star - Burried Hatchet Stout, Blonde, Pale Ale
Independence - Stash IPA, Saison
No Label - Pale Horse Pale Ale, El Hefe Hefeweizen, and Ridgeback Amber
Jester King - Mild
Saint Arnold - Amber and Elissa IPA
Rahr and Sons - Ugly Pug, Salamander Pale Ale, Octoberfest (Imperial Version) and a Cask of Winter Warmer

Even without Ranger creek a pretty solid line up of beers. Although the brewer's couldn't touch the beers, there were some reps around to answer questions and the volunteers were (for the most part) educated about what they were serving. If you go based on lines I think a lot of folks were interested in the new folks from Katy No Label Brewing. I have to say I came away impressed. I thought there Amber was outstanding, and their El Hefe was a great hefeweisen, up there with Live Oak's. Rahr and Son's probably wins the award for bringing the most beer. Initially I was excited to see their new version of their Octoberfest being poured but around 4 pm they tapped a cask of their Winter Warmer which was amazing.
The crowd was great, well behaved and all seemed interested in the beers being served. There were 600 tickets sold, so there times when it got crowded but it was never out of hand. The crowd ranged from the beer folks that I always see at events like this, to folks just curious about what's going on which at 20.00 a pop allowed regular folks to attend just out of curiosity.
Yep it was a great time, but as mentioned there were a couple of minor things that could better. The first thing I already briefly mentioned which was only having Sylvia's Food Truck out there. I know it was beyond their control, but standing in line for 20 minutes for a couple of taco's was not a good time. Hopefully the success of this event will allow more trucks to come and participate. The second issue, was there weren't enough chairs. I know that the space was not huge, but a few more tables and chairs would be nice. There were a couple of things mentioned by other folks that frankly didn't bother my that much. The first was long lines, which admittedly were there, but I don't think I ever stood in line for longer than 5 or so minutes which is a testament to the hard work of the volunteers. The second issue was the heat. Again it was hot, but it was also an outdoor festival in Houston so it could have been cloudy and rainy, cold, or hot. Luckily the clouds came around 3 pm and it helped, but it didn't bother me much. That's it though, those were really the only issues I had, or heard about. Not bad for a first event of this size.
Throughout the day there was a tent set up with items available via Silent Auction, all proceeds going to Friday Harbor. Some of the things available were Glasses from Ranger Creek, Brewer for a Day at Southern Star, 2 each of the Saison Du Buff from Victory, Stone and Dogfish, a Vertical from Stone's Epic series (Can't remember the years), vertical of Dark Lord, and a Vertical of Abyss. I am very happy to say that I got the Abyss vertical! It was a great way to raise money and was exciting to see folks running to the tent at just before 4pm when the auction closed and trying to get one last bid in. Again though even with all the excitement everyone was extremely well behaved even if it was the 4 hours into the festival and a lot of folks had a lot of beer.
I just want to say again how impressed I was by the event, how few logistical issues there were, how good the beer was (nothing lukewarm, everything was served fresh and cold), and how awesome everyone at the event was. Its truly a testament to the hard work and dedication of the folks behind Monsters of Beer Cathy Clark and Kevin Floyd. Great job guys, no pressure, but we are all eagerly anticipating next year.
Posted by Barleyvine at 7:23 AM

Good review and good to see you again yesterday. I agree about how well it seemed to come off. Could use more food and more shade (tents, benches, tables). Lines weren't too bad. The bands sounded great.

We were really impressed with the 3 beers from No Label. Looking to go out to the brewery and want to try more.
Jester King's one beer seemed weak for all the effort they are going through for new start-up.

Wished I tried Rahr's Octoberfest and held out for the Winter Warmer (I had melted by 3:00). I didn't like the Pug or the Salamander and didn't go back.

Wished 512 and Live Oak had brought extras to try since they have been around awhile and could use more promotion in Houston.

Jay,
Always great to see you. A couple of comments regarding your's:
I actually liked Jester King's. Yeah it was weak at 3%, but that's what it was supposed to be, a good easy drinking ale. I wish they could have had more beers, but honestly I thinhk the only thing they've brewed so far is the Mild.
Agree on Rahr, never been a big fan of Pug and Salamander is a hit or miss English Pale Ale. Would have LOVED to have seen 512 2 or ther Wit as both are outstanding and the wit would have gone like crazy as warm as it was outside.