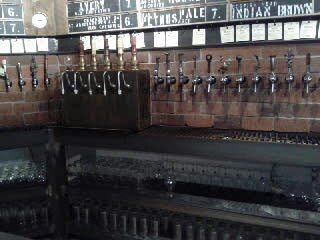 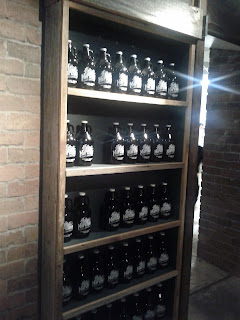 d beer engine, or hand pump (again Hay Merchant has five). The beer engine is a piston style pump that pulls beer up from a cellar (or the cold storage behind the bar) and into your glass. Notice I've not talked about gas. In typical draft beer, CO2 gas is used to propel the beer from the keg into your glass. In Cask ale the beer engine is used. However this does not mean that cask ale is flat. If you get a flat cask beer, SEND IT BACK! Yes it is less carbonated, but not flat (sorry I can't stress that enough). This lower carbonation makes cask beer more subtle and allows flavors to develop differently than in normal keg beer. Many folks prefer cask ales, and in fact in England cask ale is called "Real Ale". Now while I won't go so far to say that draft beer is not real beer and all beer must be served on cask, there is a special quality to cask beer that can't be denied. It is all these things that make it amazing to see 5 casks on line at Hay Merchant, and more than that, folks are drinking them. Cask ale isn't for everyone, and many are turned off by the less than expected carbonation which is why I thought Kevin and his team was crazy for having that many on at one time. But I've been proven wrong so far. In the fist few days Hay Merchant was open they went through 150 gallons of cask ale, which is simply an amazing number. Now many of these are special casks, like Saint Arnold Brown Ale on Chardonnay with cherries, or (512) Cream Stout with Coffee beans, so there is little wonder that they are moving fast. As much as I love those types of beers, I yearn to see something more traditional, like Real Ale's ESB or Rye Pale Ale, or Live Oak Liberation on cask. Something a little more sessionable. I'm hoping that Kevin keeps one cask line for those type of beers and the other 4 for the special ones that he's been tapping. That would make me truly happy.
Its to early to call Hay Merchant the greatest beer bar in the country, but I have no doubt that if they continue doing what they are doing, they will get there. What Hay Merchant does is help make Houston a Craft Beer City. Yes there are other great beer bars in this town like the Flying Saucers, or Petrol, and they all have their place, and they all have helped make Houston a great place to get great beer. What Hay Merchant has done differently is in combining amazing food, with an amazing beer list, cask program, growler program and employee education. These are the things that great craft beer bars are about and I can't wait to see Hay Merchant continue to grow into what it will be, something that all beer lovers should rejoice in.
Posted by Barleyvine at 12:13 PM

It sounds like Kevin and co. have opened a world class beer bar that other cities should be jealous of.

Wish this had been open when I still lived in Hosuton, but I'll be thrilled to make a trip there when I'm in town for a visit in a few weeks.

nice review Ted! looking forward to many visits.
and thanks for the sample of the pig ear.

Great post. And not only the 5 casks, but the 3 nitro systems. At most craft bars, you're lucky to find even 1.

I wasn't aware of the 3 nitro taps. Just more flexibility to serve some of the best beer in the best way for that beer.

Also glad you pointed out the menu highlight of glassware and pricing. It's very clear and is not something I've seen before.

At this point is highly premature to call Hay Merchant the best bar in the country. I think it's premature to put it in the pantheon of great places (Churchkey, Toronado, Falling Rock, etc) lots of potential to be in that conversation. What it needs to get there are two things (IMO):

1) A continued commitment to bringing beers and beer culture to Houston that hasn't been here, not just serving local and craft beers. That could be events, beers, people or all of those.
2) A bottle cellar to compliment the draft program.

I fully expect both things to happen - but IMO that's what we need before Hay Merchant joins the ranks of elite beer bars in this country.

How great is that we have a place in Houston to even discuss this? Petrol has come close, but Hay Merchant can get there.

Jack,
Right on with the Nitro taps. I focused a bit on the Cask program this post, but I plan on spending a post in the near future on Nitro taps as a whole.
Chris,
Couldn't have said it better. I think Hay Merchant can be one of those upper tier bars, and honestly I do feel its on its way as long as it continues doing what its doing and adds the bottle program you mention.

Great post mate, this sounds like an incredible bar. Only stumbled across your blog because I'm a fellow beer blogger who's going to be popping across to Texas within the next 6 months!

Really impressed with your description of cask ale. I really hope it starts to take off in America in the way that craft keg is taking over here in the UK!