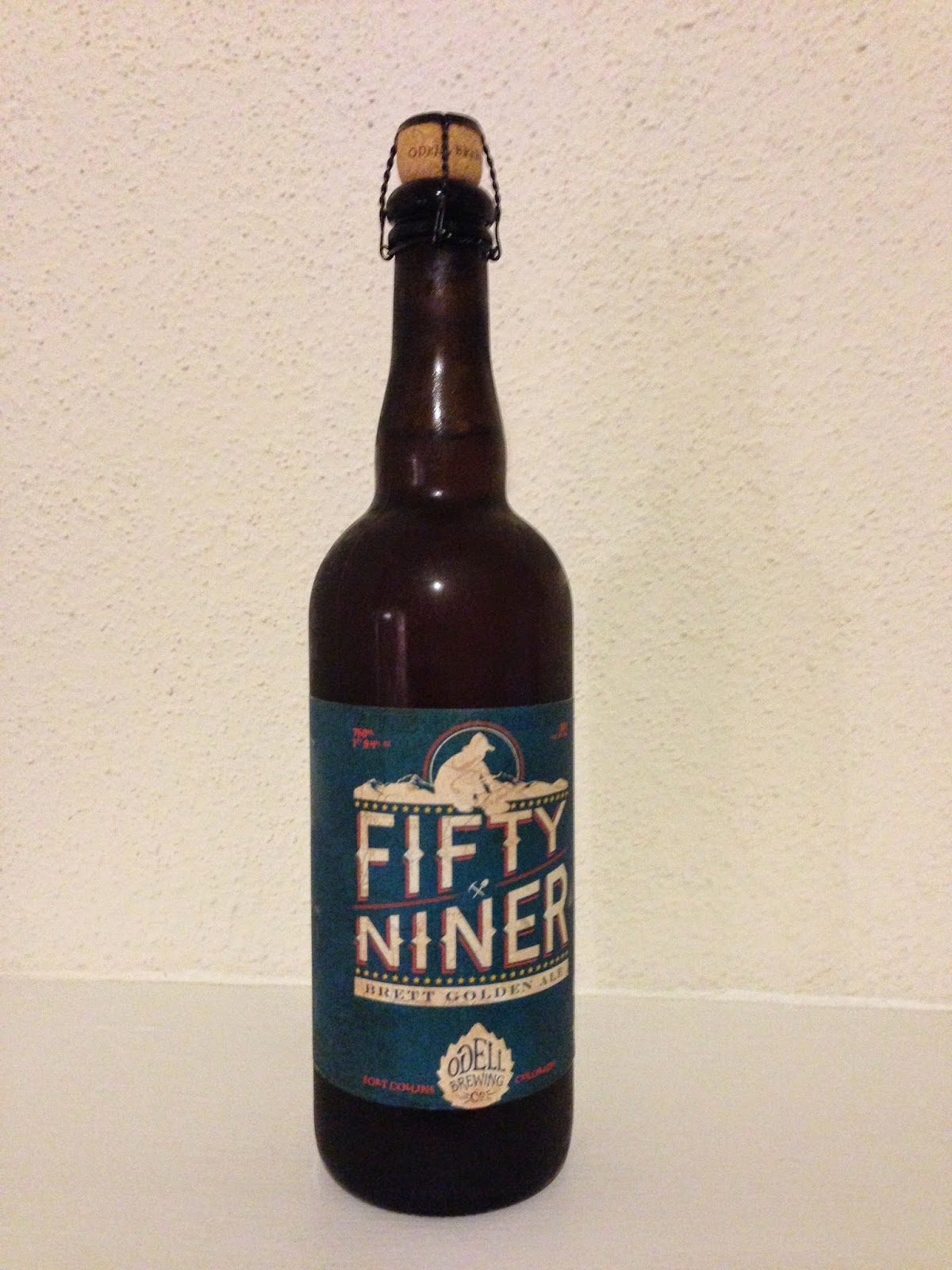 Now that I am slowly, but surely getting back into blogging, one thing I am going to start instituting is a weekly (hopefully) New Beer Thursday post.  This will be an opportunity for me to write and review either a beer new to me (maybe a classic beer, that for one reason or another I have never gotten around to drinking), or a beer new to the Houston area.  For the first one, it will be the latter, a beer new to the area.  In fact its  a beer from a brewery that is relatively new to Houston, although one that I have been enjoying for quite sometime, Fort Collins, Colorado's own Odell Brewing.  I can't tell you how excited I was when I heard that Odell was finally coming to Texas.
This particular beer, Fifty-Niner is part of Odell's Cellar Series and celebrates the great Colorado Gold Rush of 1859.  The beer weighs in at 10% ABV, is aged on oak staves and is 100% bottle conditioned with brettanomyces.  Before I get into my review, I need to make a quick comment.  After I had this beer, I was doing some reading of other reviews and many mentioned disappointment over the beer not being sour.  I tend to think there is some confusion from folks when they see the term Brett Beer.  Brett beers are NOT sour beers.  They are two different things (note that brett beers can be sour beers, but that is not due to the brett).  Brett beers are traditionally funky, and dry, not tart, sour, etc.
OK, enough of that onto the beer.
Serving Vessel: Ommegang Chalice.
The beer pours a deep copper color with a thin white head that quickly dissipated into a thin lacy film sitting atop the beer.  The nose is fruity and funky, a bit of pineapple, a bit of barnyard.
The mouthfeel is medium bodied, a bit syrupy.  Sweet up front, almost cloying.  Pineapple, vanilla, hay, again a hint of barnyard or horse blanket (or what I imagine horse blanket to taste like as I've never stuck one in my mouth).  A hint of lemony brightness, before a dry somewhat oaky finish.  I keep going back to that initial syrupy texture and the cloyingness.
This beer really has me struggling.  There are parts of it a I really enjoy.  The beer struggles and sometimes succeeding in finding a balance, but then the next sip is full of cloying syrup.  I really like the finish of the beer, but the up front its just so sweet.  Odell's is a brewery I love, but this one disappoints a bit.  Its OK, but it should be great.  I'm going to buy another bottle and give it a year to see what that does.  I think there is good structure, and with the residual sweetness and ABV, this one should age well.

Posted by Barleyvine at 9:02 PM