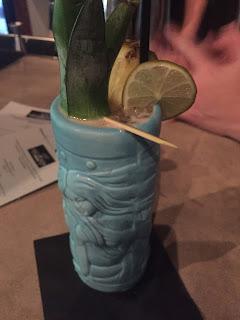 It wasn't but a short two weeks ago, that I wrote about what I would consider the first craft cocktail bar in Clear Lake, and a second one has joined the ranks.  What's really special in my mind is how different this one is.  While Preamble focuses more on traditional craft cocktails, and a little upscale (or they try to be at least), newly opened Volcano Room is an island themed bar, laid back, almost tiki, with lots of bamboo accents, nautical, Caribbean, and Hawaiian features abound.  Volcano Room is located in the old Coffee Oasis spot on NASA Rd 1 and Kirby Ln in a shopping center with Arlen's Market.  At this point, they are early in a soft opening phase, having only opened about a week ago.  Right now, when you drive up to the space its hard to even know that there is something occupying the space.  There is no sign, and the windows are heavily blacked out.  The only thing that gives you a clue that there may be something interesting going on are the tiki torches surrounding the place.  Once you walk in, you are welcomed by a very large open area, with a bar at the back, two more cozier lounge rooms on either side of the main area. 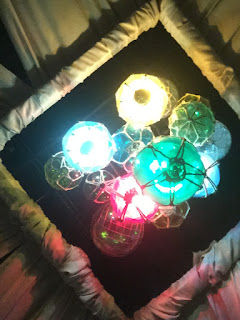 Both times I've been there I've been able to talk to the owner Steven, who is very passionate about bringing a laid back craft cocktail bar to Clear Lake.  He has a lot of experience in the restaurant business, and seems to know the area, and what folks want.  The head bartender is a gentlemen by the name of William who again seems to have a great passion for making good cocktails. Most of his experience is local CLC joins, but what he doesn't have in experience he makes up for in an eagerness to learn, read, and study about cocktails.  I really enjoyed sitting down with him and talking cocktails, and the making of different drinks, and philosophies on different spirits and cocktails.
Speaking of the cocktails, they starting off with a small list of incredibly well priced cocktails, including one of my favorites the Hemmingway Daiquiri ($7) along with some more tiki drinks like Mai Tai, Painkiller, and a Pina Coloada, all under $10.  Eventually they will expand their cocktail menu, offering a group of 7 cocktails for $7, and then a larger section with various prices depending on what it is.  In addition they'll have a food menu.  As of right now they are working out the kinks, but have a couple of Hawaiian Roll sliders, and a tropical mac & Cheese, which is an interesting mix of sweet, salty, and spicey.  They are bringing in a chef from a pretty popular spot in side the loop, which is nice to see talented folks come to Clear Lake from downtown. 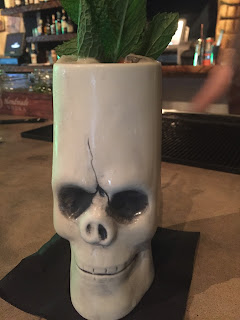 Overall the space is nice, and has a genuinely relaxed vibe.  That along with well made cocktails, and good food, I can see this Volcano Room being very popular with Clear Lake area residents.  Even at this early stage its quickly become a place I enjoy immensely.  If they continue to move forward from where they have started I believe Volcano Room can do some incredible things for Clear Lake with respect to helping making craft cocktails popular in the suburbs.
There are some quibbles with the Volcano Room.  They don't seem interested in beer at all.  There bottle selection is full of macro lagers, with a couple of Karbach cans thrown in.  They'll have 6-8 taps probably soon, but beer is definitely not a focal point.  Additionally, as I have mentioned in previous posts, I worry about bench depth, meaning beyond their primary bartender, do they have enough talent to put out consistently good cocktails.  Time will tell.
Look for a follow up in a couple of months, and we'll see how the cocktail menu has evolved and what the food menu looks like.  In the meantime go check it out, and make a pit stop in the restrooms as they are not your typical boring bathrooms.
Posted by Barleyvine at 9:02 PM

Do you have a newsletter? If so, do you send out blog posts like these to your list? I would be interested in signing up if you do.