The Session #10: The Roundup 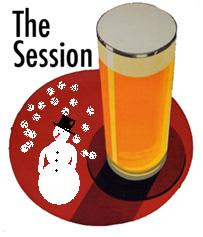 I sure never realized how much fun hosting a session would be. Its been a blast! We 30 entries from 15 states and 5 different countries. I know that I learned a lot about winter beers, and its given me an even longer list of beers that I want to try.
With that let's get to the entries:

The early bird winner is fellow Houston blogger The Dude. Going local as I did, he chose the very well made Saint Arnold's Christmas Ale. He also made what sounds like a very good Christmas turkey and sausage Gumbo using the brew. Good job!

Stan over at Appellation Beer writes about Colorado's Great Divide Hibernation Ale, a strong Winter Warmer. Stan's idea of a pairing, is the beer, a nice big fire and a plate of cheese. Sounds like a great time.

Rick Lyke of Lyke2Drink posts his thoughts on 6 different holiday/winter beer. Going above and beyond each beer is paired with different foods (or paired with a family gathering, but sometimes that's just as good). Maybe one could make a tasting menu out of this?

Rick Sellers of Pacific Brew News takes us through a list of beers trying to find that one that says 'Christmas' to him. Which did he choose? Anchor Merry Christmas Ale, not a bad choice.

The Beer Nut over in Ireland again tries to find that perfect winter beer. It seems like he has some great choices.

The Barley Blog takes an interesting twist. He has some great winter beers alright, but not from this season, they are ones that he's been cellaring since last season. He chose the session to take a few out of the cellar for a taste and see how his cellaring performed. Sounds like it did pretty well.

Jason over at the brewbasement takes up the cellaring theme as well. This time its comparing this year's version to a past one. Sierra Nevada 2004 vs. 2007. Interesting results to be sure.

Relatively new beer blogger and fellow Texan Josh over at kegs and kitchen participates in his first Session. For this post he posts on two very different beers.

Stephen Beaumont has his post over at Thats The spirit, where he takes us on a journey of 5 different winter beers.

David takes treats us to the Twelve beers of Winter from Matt's brewing out of Utica, NY. Granted its not 12 different beers, only 6, but quite a filling post.

London's own Stonch treats us to two different beers, one of them on cask.

Another Dave, this time posting on Sierra Nevada Celebration and how that beer signals the beginning of the Season.

Captain Hops rewards us all with not 1, but 3 Beer Haiku's on Winter Beers.

Greg Clow's been so busy that he couldn't write up a separate post on winter beers, but instead guides us to an article that he wrote for the Taste of TO. The article's good so make sure to check it out.

Wilson, experiencing a much colder winter that down here in Texas (3 inches of snow and I'm jealous), treats us to two different Winter Seasonal beers, one from Goose Island, the other from Boulevard Brewing.

Buttle writes us from New York about a Winter Seasonal from his local brew pub. Its his first Session and he gets kudos from me for selecting and promoting something local.

Tom over at the brew site has started a Beer Advent Calendar where he posts on a different beer on each day of advent. Great idea, wish I had thought of it. He rolls that theme into this months Session, selecting Wild Goose's Snow Goose Winter Ale.

Christina joins us for her first Session and starts off with a bang, giving us a post with 6 different beers.

Shawn over at beerphilosopher.com posts on a local beer Schafly's Christmas ale. He thinks this beer would do just fine with a desert like ginger spice cake drizzled with white chocolate shavings or even a something savory like spiced ham.

Over at Boak and Bailey they pontificate on what it means to be a Christmas ale. Noting that its different if your asking the question in the UK, Belgium or Germany.

Tim of the Soux city Journal joins us and feels so bad that he couldn't participate in last months session he offers a two-fer.

Josh of Flying Dog Brewery and Beerdinners.com posts on a Do it yourself beer dinner, focused on Seasonal beers. He write specifically on Flying Dog's K-9 and what food will go with it. But this post is much more than that, its where to go for ideas to host your own beer dinner. A great site and one that I might devote an entire separate post to.

Alan from a Good Beer Blog finds a good choice from Western Canada, Faceplant Winter Ale from Nelson Brewing in BC.

Keith doesn't just write about any Winter Warmer, he writes about his. A home brewer, Keith discusses how he made his version of a Winter Warmer, which is based on Houston's own Saint Arnold's Christmas Ale.

Josh from Humps brewing posts his thoughts on some home brewed winter seasonals and those that are commercially available as well.

Snekse over at Gastronimic Fight club takes us through the Sam Adams Winter Seasonal Pack (along with A-B's Winter's Bourbon cask Ale). Having tried most of the Sam Adam's selection I can appreciate the write up.

Lost Abbey's Tomme Arthur writes up on their newest Christmas Ale Gift of the Magi. Its also more as he gives some insight into his thoughts on the season. He also makes sure to get the food and beer pairing with his mention of the cheese plates served with his two Christmas ales. One of these day's I'll make it to his brewery dang it!

J over at the Brookston Bulletin writes his thoughts on the Christmas seasonal beer. His post is also yet another one on the wonders that is Anchor's Christmas ale - or Our special ale(and I have to agree).

Kieran initially thought that this session would be difficult for him. Seeing as he is from (I meant , my sincerest apologies Kieran), and its not Winter there, how does one get into the 'Winter Beer' spirit? You do what he did and make one!

Craig over at Beers Beers Beers is our last entry (so far). His is another posting on a great selection of Winter Beers, TEN in fact!

Well that seems to be about it for this month's Session. As I mentioned this was a lot of fun and I hope to have the pleasure of hosting again sometime. Stay tuned as I'm sure that next month's theme will be announced any day now. Till next time.

UPDATE: We had one additional entry that I overlooked in all the emails.
This one from Steve at Summer of Beers, who in Southern California finds the weather as Winter-y as I do. His post is on the Jolly Pumpkin Noel de Calabaza, an oak aged Belgian Dark ale.

That makes it 31 posts for this Session.
Posted by Barleyvine at 8:25 AM

Maybe my link got lost in the email shuffle but I had an entry as well. http://trojangradstudent.blogspot.com/2007/12/session-10-tis-season-for-noel-de.html

Good round up, however saying I live in Australia is like saying you live in Canada, enjoy your maple syrup, hehe.

Kieran, forgive me, by the time I got to writing about your entry I was getting brain dead. I made a correction in the post.
Steve, I've added your entry to the round up sorry for overlooking it in the first place.

Hi there. Both the beers I mentioned in my post were from casks, not just one of them. Cheers

Good roundup and a lot of good reading ... I've got a lot of beers to drink, me thinks.

Wow, that list is as impressive as the beers mentioned, 31! Whew... I've got some reading to do. Thanks for organizing this Session, Tedo.