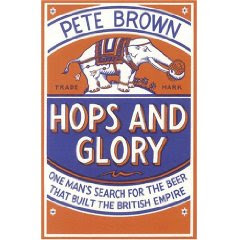 Everytime I am at a bookstore I was always head to the food and beverage section hoping to find some new book on beer. Some day's I'm lucky others I'm not. And sometimes the best books aren't even at a bookstore. For instance this one I was able to pick up at GABF as its not available in the US at this time. The book is written by British Beer writer (and British Guild of Beer Writer award winner) Pete Brown. It also happens to be one of the best books I've read in a long long time. The gist of the story is that Mr. Brown wants to re-create the journey that the original India Pale Ale's traveled from England to India, but the book is so much more than that.
I think most craft beer lovers are familiar with the story: The British Empire having settled India had a desire for good old British Beer, however by the time the beer arrived it had soured beyond drinkability. Enterprising brewers in London created a highly hopped beer and with the hops acting as a preservative, made the journey intact and was drank in large quantities by the British in India. As with most things this is only part of the story and even that is not the whole truth. Pete Brown's rather large novel takes us on two parallel journeys that help us discover the true story of India Pale Ale, a story that all of us Hopheads should read and enjoy. The book switches from Pete's struggle to recreate the journey (who knew how hard it is to book sea travel?) to the history of the British in India. It is this second story that makes this book much more than just one about beer. This book would do well on any History buff's book shelf and is it takes an unbiased extremely critical look at the British and the East India Company in particular. The corruption and death that they brought to India is quite eye opening and there in the middle of it all is one of the drinks that we love.
As with Pete Brown's other books, one of the fun things in Hops and Glory is the debunking of many myths, from how IPA got started to how it made its way back to the British Pub's (no there was no ship wreck). Its also a very humerus book due to Mr. Brown's self deprecating style of writing. Yes its a thick historical look at the creating of a beer and sociopolitical culture of India in the 1800's, but its also funny, enlightening and well written. I highly recommend this book to any history buff and any lover of craft beer.

While this book is not currently on sale in bookstores in the US there are a few places you can try to buy the book:
UK Amazon
The Book Depository
Abe Books
Posted by Barleyvine at 8:47 AM

IPA is absolutely one of my favorite beer styles. Great tweets and blog! Now off to find this little gem:-)