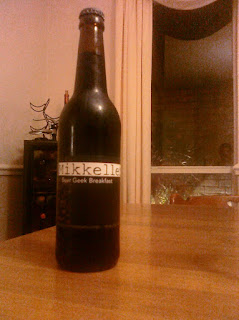 Besides going to GABF, one of the nice things about visiting Denver is the opportunity to pick up beers that we don't get here in Texas. Lucky for us we get a lot of Colorado beers here, but there are others from around the country and around the world that Denver has that we don't. So whenever I go into a liquor store in Denver I'm always on the look out for new brews. I was excited when I saw this brew on the shelves. Yes we do get Mikkeller beers here (finally) but not this one, so I eagerly picked it up and the other day my wife and I sat down to try it out. Before my notes though a few words on the brewery itself.
The Brewery: Mikkeller started in 2006 by two Danish Homebrewer's. In 2007 one left and now Mikkel Borg is the sole brewer. One of the more interesting things about this Danish brewery is that they don't have a brewery per se. Instead they travel all over the world and brew their beers at other brewery's. Some of the brewery's they have brewed at include De Proef in Belgium, Brewdog from Scotland, Three Floyds from Indiana, Nogne from Norway, and Gourmetbryggeriet in Denmark. The ones Texas gets are brewed at De Proef brewery, this one in particular was brewed at Nogne.
The Beer: This brew is a strong stout made with oats and coffee and weighs in at 7.5%. The beer pours a pitch jet black with a dense head of caramel colored foam that grabs the sides of the glass. The nose is oaty, coffee, licorice, chocolate, raisins, figs, coco. The mouthfeel is thick and creamy notes of coffee and cereal, espresso, grainy mouthfeel. Citrusy notes, almost slightly lemony. Bitter and rich, multi-layered, vanilla notes, dark dried fruits. An outstanding beer and great introduction to this brewery can't wait to pick up the ones we have here. This one gets an A- from me. Here's what the folks at BA had to say.
Posted by Barleyvine at 6:49 AM