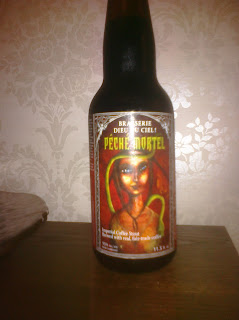 One thing I have learned as I increase my knowledge of craft beers is that almost every country has a craft beer culture. When folks think of Canadian beer most think of Molson, or Moosehead but there is so much more. Many are familiar with the greatness that is Unibroue from Chambly Quebec, but that is not the only craft brewer from the French Canadian province. Located within Montreal lies Dieu Du Ciel, a brewery that I've heard of, but never had the chance to try their beers. That all changed when I picked up a couple of their beers when I was in Colorado recently. The first one I didn't post on was called Rigor Mortis, an amazing Quadrupel that weigh 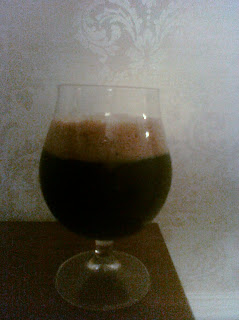 ed in at 10.0%. Dieu Du Ciel has a reputation for making some amazing and unique brews, many of them are higher gravity. Additionally the artwork on the labels is incredibly eye catching, I don't know who the artist is, or the story behind the labels but they beautifully done. Peche Mortel, or Mortal Sin is a bottle conditioned Imperial Coffee Stout.
The Beer: This one weighs in at 9.2% and pours a pitch jet black with a thick dense head of cafe colored foam. The nose is of rich coffee, chocolate, darkly roasted malts and some citrus notes. The mouthfeel is full and creamy, black coffee with cream, roasted malts, slightly understated notes of bitterness. Very little alcohol. Chewy. It is reminiscent of iced coffee, slightly sweet. Some citrus acidity notes of lemon show up as well. Rich and smooth. Notes of alcohol shows up as it warms. Roasted malts, slight roasted bean bitterness shows up, but for the most part its creamy smooth. Figs, and raisins and other dried dark fruits show up enriching the flavor as the beer warms. This may be the best coffee stout I have ever had. This one gets an A+ from me. Here's what the folks of BA think.
Posted by Barleyvine at 6:36 AM