Ever since I first heard the rumblings about a restaurant that would be celebrating not only good simple food, but craft beer as well, I've been excited. Those first rumblings occurred back in September of last year and I've been following the goings on of BRC Gastropub since that time, waiting for it to open. Well that time has come. The newest 'B' restaurant (joining Branchwater Tavern and Block 7) on Shephard south of Washington Avenue is now open. BRC Gastropub is owned and operated by the same folks that brought you Glass Wall in the Heights. I spoke with Lance Fegan, chef of Glass Wall and co-owner of BRC, about his vision for the food at BRC:

simply put is 'its the type of food a chef would want to eat', it's easy to
understand, easy on the wallet, fresh everyday

Well that sounds good to me, but what about the beer? Well...it has a great selection of draft beers. There are about 25 taps with strong variety, and some Texas Representation in Saint Arnold's and Real Ale. You can get IPA's, Pilsners, Brown Ales, Porters, Belgian Ales... The bottle selection is similar; a very large selection with a few large bottle formats thrown in as well. Larger bottles like Stone's Smoked Porter are available for sharing with the table. All this I knew, but what I didn't know was how it would all come together. How's the food? Are the tap lines in good shape? How's the beer knowledge? I aimed to find out, and headed to BRC for dinner on Friday night.
The full parking lot was a good sign, as we pulled up to the smaller than expected building with the big red rooster out front (I guess this is as good a time as any to explain that BRC stands for Big Red Cock). We headed inside to a well appointed, but small, dining area crowded with tables and booths along one wall. Another wall houses a long bar behind which sits a couple dozen tap handles. Not seeing any tables free, the wife and I headed outside to the comfortable patio and were promptly seated. We were handed the dinner menu and beverage menu. The beverage menu got major bonus points for having the beer list up front with the wine in the back. The beer was well organized into draft, bottle, and large format bottle, with each section subdivided by category (brown, pale ale, IPA, etc...). I selected a Real Ale Devil's Backbone and the wife selected Avery's White Rascal.
Beers chosen, we now needed food. The appetizers looked amazing. Things like Dr. Pepper fried Quail and Blue Crab Beignets sounded awesome, but there was one thing that drew my wife's attention, and that was the Pickle Jar with house cured cucumbers and asparagus. For dinner, my wife ordered the State Fair Griddled Cheese, and I ordered the BRC Pub Burger with Fries. We also ordered a side of Mac and Cheese of the day and Seasonal Fresh Veggies.
The order was taken quickly, and it wasn't too long before our beers and pickle jar arrived. It was exactly as it sounds (and looks). A jar of pickles...crunch, sour, dill...simply awesome. These pickles were divine with sprigs of dill, and whole black peppercorns in the pickling liquid. Th 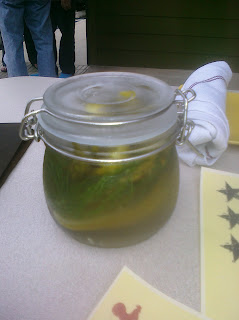 ere were easily 10 or so pickles that we devoured while waiting for our food. Relatively quickly after eating our last pickle, our food arrived.
My wife's griddled cheese sandwhich was stuffed with cheese, steak, and tomatoes. My burger was topped with thick slices of bacon, tomatoes, onions, and a special BRC sauce. My fries came in a neat little mini fryer-esque holder. Our sides were set on the table, and we started eating our way through the food.
Griddled Cheese Sandwich - Texas toast with cheese, sliced steak and tomatoes. A deliciously meaty and cheesey delight. This was well seasoned, not too salty, almost perfect. My only complaint would be that at times the sliced steak was tough to bite through so you would have to take a huge chunk of steak with a bite leaving a lonely pocket of cheese behind. Maybe if the steak was chopped instead of just sliced this would be perfect. 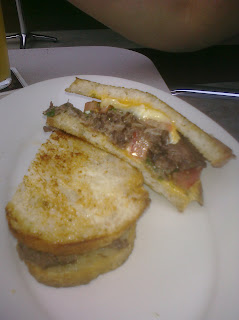 BRC Pub Burger - Tillamook cheese, tomatoes, Maple-y bacon, onions, MEAT, and a BRC special sauce all sandwiched between buns. The bread was creamy eggy deliciousness. The meat was well seared but juicy and just slightly pink in the middle. The bacon crispy. All in all an incredibly well made burger with great textures and high juice factor. I don't know what the BRC special sauce was, and in all honesty I'm not sure what it added, as it surely wasn't overpowering anything on the night I was there. The fries were well seasoned thin strings...simple with large crystals of sea salt and herbs. While they tasted delicious, some were a little too limp and after them touting the 'double fried fries' I expected them to be a little bit crispier. That was a small disappointment that didn't affect their taste. 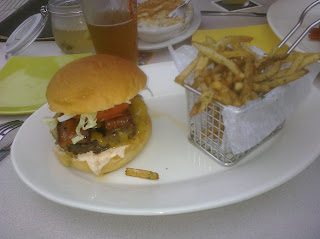 Mac and Cheese - This dish changes daily depending on what the chef wants to do with his Mac & Cheese. While most times I'm easy to please with this dish, BRC's M&C was truly a treat. Baked with bread crumbs topping the dish, it was hard to tell what the Mac was made with until the first bite....bacon? yep that was there, but something else, something richer, something blue....yep it was blue cheese and bacon Mac and Cheese. This dish was one of my favorites. Yes it was rich, so I couldn't have eaten a whole side by myself but shared with the wife, we were able to do some damage. The crunch bread crumbs added a needed texture to the mac and cheese. It was pretty much perfect. 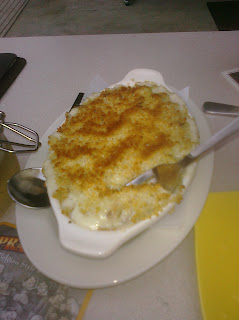 Seasonal Vegetables - This was probably the one disappointment of the night. A dish of sauteed vegetables. Mainly squash topped with some herbs and what appeared to be a marinara sauce. While it didn't taste bad, it felt like something I'd pick up at a cafeteria compared to the rest of this fabulous meal.
We finished our meals and beers with happy smiles; very content and excited about this new establishment. I didn't talk much about the service intentionally. BRC has been open for such a short period that it was obvious at times that service issues were still being worked out. While our initial orders were taken promptly and the food arrived quickly and hot; after the food arrived we didn't see our waitress much. In fact I didn't get to order a second beer due to her absence, and we had to waive down a busser to pay our bill. This was a hectic Friday, one of their first (if not their first), so for now in my mind its excusable as they get their legs under them. I'll be back for sure and I know that their service will improve (if it doesn't I'll state as much here on the blog).
Other things that I would love to see in the future at BRC:
1) Cask beer - Again I have spoken to Mr. Fegen and they have multiple Cask Engines on order so that should be forthcoming!
2) A larger and more diverse 'large bottle format'. I think this is a way for folks to share a couple of different beers. It can be better to get unusual beers in bottle format vs. draft where you have to worry about long term quality of the beer if patrons aren't buying it.
One idea I absolutely loved that BRC is doing is selling tasters of beers. The tasters were a few ounces and are perfect to give patrons the ability to sample multiple different beers, some that they may not be familiar with before purchasing. Simply a great idea.
BRC is something that I have been waiting for Houston to have for a long time. A place that celebrates not only good simple food, but great beer as well. There are not many places in Houston, if any, with the quality of food and the beer selection that BRC offers which is why it is working its way quickly into one of my favorite places in Houston.
Posted by Barleyvine at 8:34 PM

Hey, it was great running into you guys on Friday. We really enjoyed our food at BRC as well and all of us took half our meals home. We'll certainly be back there again.

Uh oh, I guess we're going to be seeing many, many reviews of BRC coming up. That burger lookes like it is wrapped in toast (sourdough?), not a "bun" per se. I like that ratio.

Oh, never mind. That must be the cheese sandwich, not the burger. But it looks good!