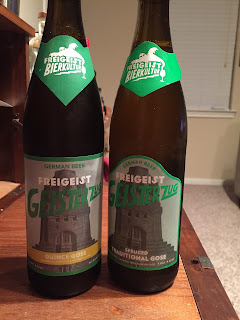 American craft beer drinkers are an unusual lot.  They aren't particularly loyal to any one brand or style, instead floating from new beer to new beer, and new style to new style.  The craft beer craze has chased double IPA's, Triple IPA's, barrel aged beers, sours of various intensity, and many many more.  Of late it seems that the craze has transitioned from high alcohol beers, to lower ABV beers that are just as flavorful as their stronger cousins.  Craft beer nerds have looked back to the old world to fulfill their needs, looking specifically to Germany and consuming some of their sour beers like berlinerweisse, and gose, which is the purpose of this post.  It seems gose is the beer of the summer, as many craft brewers are releasing all types of gose, flavored with fruits, spices, herbs among other things.  These beers of course range in range of quality, but for local picks, I would look at any of the gose offerings from Texas Beer Refinery, and the gose from Galveston Bay Brewery is very good as well.  However, this post is focusing on gose from the mother country, specifically a brewery from Cologne, where I used to live: Freigiest Geiserzug.  My tasting notes will look at their standard Gose as well as their Quince Gose, but first let's answer the question of What is gose?
The Style:  Gose was traditionally brewed in the German city Goslar.  It is a wheat beer that is soured post boil with lactobaccilus, although originally it was a spontaneously fermented beer.  Additionally, gose is brewed with corriander and salt adding an herbal sea note to the beer.  Gose is an ancient beer going back to the 16th Century.  Over the years its popularity declined and shortly after World War II, the last producer of gose close.  However, shortly thereafter in 1949 Friedrich Wurzler brewery started producing the beer in their home town of Leipzig which is where it was produced until 1960.  At that point there was no gose being commercially produced.  It remained that way until the 1980's where it popped up briefly before disappearing again briefly in 1988.  However by the late 80's there was one small brewery in Germany producing a gose.  However, as with many styles, it found its way to America where craft breweries started experimenting and helped revive the style, and as always they added their own twist to the original recipe with many version made with added fruit.
The Brewery:  Freigiest Geiserzug is based out of Cologne, Germany.  Cologne is mainly known for their namesake beer, the easy drinking Kolsch. Friegiest started as an offshoot of Cologne brewpub Braustelle.  Their whole goal is to stretch the boundaries of German beer culture and work to bring back and reinvigoarte old styles of beer.  Their line up of beers is tremendous with a ton of different and strange styles being made. But the two I am focusing on are their Gose, and Quince Gose.
The Beer:
Spruced Gose - This beer weighs in at 5.2% and pours a cloudy hazy straw colored with a thin white head of foam.  The nose is tangy, tart, smells of salt air, coriander.  Mouthfeel is effervescent, medium bodied.  Satly, tangy, sour, coriander, lemon peel.  Very easy drinking.  The label mentioned there were some funky notes, but I really didn't get that.  Maybe a hint of buttermilk?  Lots of acidity.  Lemon cookie batter.  This beer was awesome, and a near perfect example of the style.
Quince Gose:  Again this one weighs in at 5.2% and pours a honey golden color with a bright white head of foam.  This one is slightly darker then the previous example.  On the nose there are some fruity esters, tartness, sea air.  The mouthfeel is fuller bodied than the traditional gose.  Notes of salt, tanginess, quince on toast, some astringency, sour.  Not mouth puckeringly sour, but a nice hit in the back of the tongue.  A really nice level of acidity, really good.  Thirst quenching, but you want more.  Seems less salty then the previous version, or maybe there is a little more going on so it hides the saltiness.  More orange/lemony notes, versus just lemon notes from the other beer.  Another really good example of a gose.
Highly recommend picking up either one of these beers from Freigiest or any of their other offerings.
Posted by Barleyvine at 9:05 PM