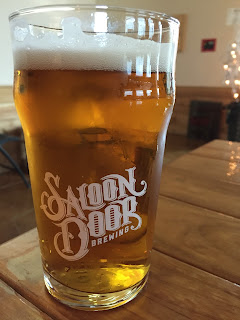 The other day, I got to run by Webster's own Saloon Door, the new local brewery that I've written about before. I had heard that they had come out with a summer IPA and wanted to go and check it out.  This summer IPA was brewed to be light, refreshing, and utilized the more tropical flavored New Zealand hops of Nelson and Motueka.
Both of these hops are relatively new to the market.  Neslon Sauvin was released in 2000 through a breeding process lead by the Horticulture and Food Research Institute.  This hops brings Savignon Blanc, grapefruit, and rhubarb flavors and is normally used as an aromatic hop. Motueka is another new and interesting hop, bred from the great noble European hop Saaz.  It has a low alpha acid, and shares the clean bitterness of its parent. Normally utilized as an aroma hop this will bring some notes of citrus and flowers. Nelson is definitely a darling of the craft beer community with many beers out there highlighting this hop. Motueka I was less familiar with, so a beer with this combination had me intrigued.
The Beer:  The beer poured a sunny golden color with a thin white head of foam that remained throughout drinking.  The nose was like a bowl of citrus, or walking through the citrus section of a grocery store.  It was very bright, clean smelling.  Mouthfeel was a little thin.  Maybe medium bodied up front, but finished a little thin.  There some tongue coating, tingling resinyness.  Lots of floral hoppy notes, grapefruit, and citrus pith.  Star fruit, marmalade, biscuits were all there.  The flavors remained bright, crisp and clean throughout drinking the pint.  Some notes of apricots, maybe a hint of lemon as it warmed.  Overall I really enjoyed this beer.  The hop flavors were on point, and the main expression of the beer, however there was enough pale malt backbone to give the beer some spirit. I'd wish for just a little more body, maybe a bit more carbonation, but overall a solid B+ beer.
Posted by Barleyvine at 8:42 PM