Time does indeed fly. Without even meaning too I've realized how long it has been since I've posted on the blog. Not due to lack of things to write about (I have plenty) but just lack of time. Hopefully this will be a great week to get caught up. This post is about a beer/food pairing I cooked up about a week ago. I paired the food with an Otter Creek Dubbel, so first a little on the beer.
The Beer: Poured the beer into my Maredsous glass which I think was appropriate. It poured a chestnut brown with a thin head. The nose is caramel, malty, fruity, yeasty. It ha 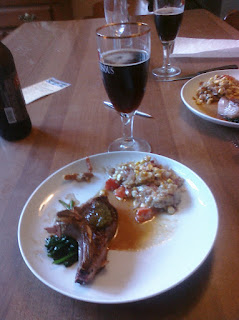 s a medium mouthfeel a little on the week side. Not a lot of effervescence, it slides and slithers along the tongue. Rich and malty with yeasty and rye bread notes. Some dark figs and raisins, but not much. Its a simple beer with a little but not a lot of character. This one gets a B- from me.
The Food: I cooked up some lamb with a jalapeno jelly marinade, sat it on top of some sauteed spinach (the lamb was again topped with a dab of the jalapeno jelly) and served with what was supposed to be corn pudding pie, but ended up just corn pudding. The pie crust didn't turn out how I wanted it (lessons learned). I thought it was a nice pairing with the beer. The rich malty bready, and slight sweetness of the beer complimented the slight heat of the jalapeno jelly and the richness of the lamb. I think if the Dubbel had just a bit more of the figs and raisins it would have been an even better pairing, but this was pretty solid as the beer complimented but didn't overpower the food.
Posted by Barleyvine at 9:29 AM