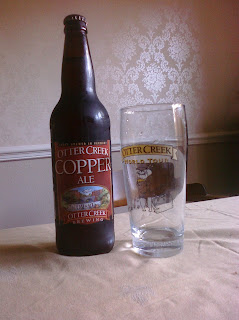 Yet another brewer that is relatively new to the Texas market. This one is based out of Vermont. We've been getting some of their beers here for around 6 months or so, but this was the first time I picked up any. Of course the reason was a good one. I was at a Whole Foods and they had a mix pack of 3 of their beers in 750mL along with a special Otter Creek glass. What a deal. It came with their Copper Ale, Porter, and Dubbel. The Copper Ale is their take on a traditional German Alt beer. Whats an Alt beer you ask?
Beer Style: From the wonderful Beer Judges Certification Program website here are the stats: Aroma should be of rich malts, noble hops and low on the fruity esters. The color should be light amber to bronze with an off white head. A medium bodied mouthfeel with a good amount of hop bitterness balanced with a crisp clean maltiness. Alt Beers have an interesting history behind them as well. This is a top fermented beer that is usually brewed along the Rhine River in Germany specifically in the town of Dusseldorf. When I was living over there, it was quite interesting to see the combative nature of those that were Dusseldorf Alt drinkers vs those that were Cologne Koslch drinkers. Its a long standing rivalry each thinking their beer reigns supreme. Alt is German of Old, but this is no old ale in the sense of the English style. Instead Old refers to the way its in made its defiance against change. The style gained popularity in the mid 1800's when everyone else was going crazy for lagers. As brewers and cities in Germany started to lighten their beer, Dusseldorf stayed true to their roots with this darker ale.
The Beer: This ale pours a copper color capped by a thick dense off white head of foam. The nose is of caramel and toasted malts, a bit of a hoppy presence but its subdued. The mouthfeel is medium bodied with caramel malts at the forefront and maybe what I think I taste is some Munich and Vienna malts in there as well. Good level of carbonation, and a solid amount of floral hop bitterness almost spicy a bit tinny, not citrusy like our American hops. An easily drinkable beer on a hot Texas summer day. We served this with a nice dish of summer squash stuffed with okra, corn, tomatoes and ground beef. It paired wonderfully well with the flavors. A nice beer that gets a B from me. Here's what the folks at BA think.
Posted by Barleyvine at 9:57 AM

Thanks for the note and the style update. Good to see Otter Creek has made it's way to Houston.