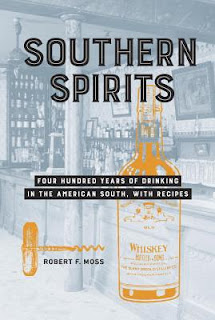 While I enjoy writing about spirits, beer, and wine, and of course I rather enjoy imbibing in them as well, what I truly love, is educating myself on those things.  I have a voracious appetite for new books on booze, cocktails, and beer and every time I go to a book store, the first section I head to is the food and spirits.  A couple of weeks ago, in visiting the wonderful Brazos bookstore downtown I ran across this book: Southern Spirits by Robert Moss.  Now here's a book that combines drinks and its role in southern culture, sounds like a book right up my alley.  I must say I was not disappointed, this is truly a tremendous book, capturing almost everything you could ask for in a book about about history, the south, and spirits.  The book reads as part history book, part spirits history, travel guide, and cocktail recipe book.  Its extremely educational as well as book that keeps your attention, and doesn't drag on.  I found it to be a relatively easy read, and not overly dense.  As someone with a large collection of books on spirits, beer, and wine, there was still quite a bit I found to be educational so I think this one is a good pick up for folks with all different levels of knowledge.
The book follows an easy linear pattern, starting off with the founding of the new world, and the first alcoholic beverages made on this land.  Each chapter starts off with a recipe based on a spirit that is the focus of said chapter.  For instance the 2nd chapter that focus on the early 18th century starts off with a recipe for Rum Punch which leads into an in depth discussion of Rum's place in the new world. A later chapter concerned with the golden age of the southern cocktail starts off with a recipe for the classic Sazerac.  All the recipes are great, some are easier to make than others, some are single servings, while others (the aforementioned Rum Punch is one example) are for larger groups of people, some of these cocktails are fairly standard fair familiar to most consumers of craft cocktails, but there are some that stand out or at the very least unfamiliar to me. Another thing I enjoy that this book does is it highlights new produces of spirits.  For example in a brandy drink they call out Carriage house brandy which is out of North Carolina.
The book wonderfully captures the rich history of drinks in the south isolating each spirit to a specific time frame.  Brandy, Madeira, Whiskey, Rum, beer all have a very specific place in southern history.  Yes of course there is some overlap, but I believe the premise still holds, and this book does an exceptional job of highlighting that.  Southern Spirits also pulls no punches in debunking well spread falsehoods on the birth of your favorite cocktails.  From drinks like the aforementioned sazerac to the mint julep, Mr. Ross goes in depth on the history of how these drinks came to be, which is one of the strengths of this book.
If I had to highlight a weakness of this book it would be that it finishes too soon. While this book does an outstanding job of highlighting where southern spirits have been, I think it could have done a little more to highlight the resurgence and where southern spirits is going.  While I understand this isn't the primary purpose of the book, I think its a small miss in an otherwise amazing book.
This is a must add for anyone that enjoys southern culture, spirits, or like me, both.
Posted by Barleyvine at 7:58 PM