Clear Lake city and the surrounding area, including Friendswood, and League City have grown immensely when it has come to beer bars, breweries and as I've written recently, cocktail bars. One area that has a lot of room to grow is destination restaurants, a place that people will travel to, from inside the loop or Galveston just to eat at.  Maybe, just maybe that is starting to change with the recent opening of Brasserie 1895 in Friendswood.  The chef and owner is Kris Jacobs.  Chef Jacobs has a distinguished history, taking grand prize at last years Woodlands Food and Wine festival (beating out 50 other chefs), as well as having a place on the Houston Chronicle's Food Critique's top 100 restaurants the last 3 years for the work that he did at Kris Bistro.  When news first came out, last year that he was opening a restaurant, I was curious to see what he was doing.  After I found out that the focus would be on European cuisine as well as focus on craft beers, I knew this was a place I would be visiting as soon as it opened.  That time is now.  Brasserie 1895 opened its doors a couple of weeks ago to start a month long soft opening period, and last Friday I 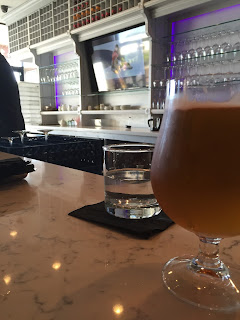 was finally able to stop by to check it out.  One thing I'll make very clear, is that this was a soft opening so I didn't expect things to be perfect, instead I wanted to get a sense for where things will be going in the future. With that in mind, let's talk about my impressions.  1895 is in an old shopping center right across the street from the old Perry's meat market.  Its an assuming outside, so the inside can shock you a bit.  There is a lot of purple.  I mean a lot.  There is a really quaint bar area on the left when you walk through, white marble top, white shelves, lots of glass ware, and old antique objects scattered about.  The rest of the space is taken over by a scattered array of tables, booths, and along the opposite wall from the bar a large banquet
booth set up with tables and chairs facing the wall, and an open kitchen in the back. My date and I were early for our reservations so stopped at the bar for a beverage and to peruse the drink menu.  There is a small wine list that seems at first glance to be well priced with a smattering of offers by the glass. The beer menu has a list of 13 taps, almost all very reasonably priced (The Duvel seemed a bit expensive).  I settled for the Victory Golden Monkey, a Belgian style Tripel as we waited for our tables and I was able to take a look around.  We were sat promptly at our 7pm reservation time and quickly scanned the menu to find a few dishes we wanted to check out.  For an appetizer we shared a dish of fried oysters on top of baked strips of yuca, topped with green chile sauce and fish roe.  For the main course my date had one of the many wood fired pizza offerings, this one topped with pesto, speck, arugula and a fried egg.   I had the fried chicken with 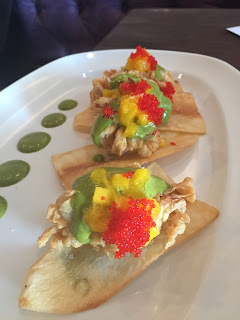 foie gras gravy (yes you read that correctly) mashed potatoes, pickled carrots and green beans.  Dessert was an apple tarte tatin with home made ice cream.
Our waiter was very good, walking us through the menus as we ordered the food and our appetizer quickly came.  This dish of oysters and yuca was simply amazing.  Textually crunchy, with spicy, sweet, and salty flavors all playing with and against each other quite nicely.   Once we finished the dish, a waiter brought us another serving of the appetizer. We told them we had already received it, however after checking in the back they realized they had made a mistake, so we were able to score a second helping of this dish.  The entrees then came and they were both incredible.  Beautiful to look at as well as eat.  The texture of the dough on the wood fired pizza was crispy and simultaneously chewy.  The chicken fried steak reminded me more of schnitzel playing off of Chef Jacobs experience cooking European style foods, but again was well flavored.  The foie gras gravy I want to bottle up and 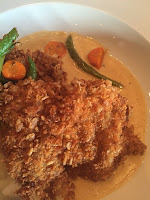 take with me wherever I go.  I truly loved how the flavors of that dish with the pickled carrots all played so harmoniously with each other. 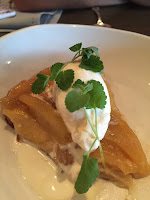 Even after all this we saved room for dessert, especially after I heard that the apple tarte tatin was on the menu.  I haven't had one since a trip to Europe a few years back so was eager to try it. Simply put it was exquisite.  Piled high with apples and a dollop of rich vanilla ice cream it was part purely American apple pie, and something else.  It reminded me of my grandmother's cooking, as well as my European travels.  There was a little bump in the service here as it took quite some time to get our dessert due to some miscommunication between the front of the house and the kitchen, but it was definitely worth the wait.
Overall my date and I had a wonderful experience at Brasserie 1895, the food was outstanding, and yes, there were a few bumps in service, but some of that is excused during the soft opening period.  At least for me it is.  The grand opening is this Friday, so I plan to go back in a few weeks to see if all the kinks have been worked out, and do a full review.
Posted by Barleyvine at 5:54 PM