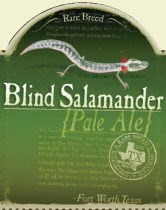 The first full week of 2009 and I'm off to drinking local beers it seems. This one comes from Ft. Worth's Rahr and Sons and is a special release. The Blind Salamander is the first of Rahr's Rare Breed series. This series celebrate endangered Texas species with a portion of the sales of these beers going to the Texas Parks & Wildlife Foundation. Bonus points to Rahr for doing something good for the state and the environment. If you'd like to more about the Blind Salamander check out Rahr and Sons site. Ok so the back story has been told, but really whats the most important thing?
The Beer: This one pours a dark copper with a thin head. The nose is of pale malts with some floral hops. They British East Kent Golding hops here so the citrus-y notes we get from American Pale ales is out. My first impression of the mouthfeel is of a smooth and easy drinking ale. Pale malts, caramel, bready with an earthy undertone from the hops. Very low bitterness to this beer, really couldn't even detect any. There is a good sweetness to this beer, light and relatively easy drinking. To me this beer tasted more like a Shiner Bock then a Pale Ale. A disappointing Pale Ale to me, this one gets a C+. Some variance from the folks over at BA but most seem to like it more than I did.
Posted by Barleyvine at 6:48 AM

Good morning. I would like to know to whom I could send product information to regarding Buckbean Beer that I represent.

"A disappointing Pale Ale to me"

This is more an English-style pale ale rather than an APA, so you will get more malty and bready flavors rather than citrusy hops. Rahr did pretty good on this one.

We'll have to agree to disagree on this one. I understand that they were going for more of an English Pale ale then an APA, but to me this one tasted more like a Shiner Bock, then any kind of Pale ale, British or other.