The last year saw a lot of new breweries came into Texas, but if I had my choice, one of the breweries I would love to see make its way to this state is The Bruery out of California. I've had the opportunity to try their beers a few times before as my wife brought them back from her travels to California. In addition to their regular beers they have started a unique line of Christmas beers: The 12 days of Christmas. Every year they will release a beer styled after one of the lines of the 12 days of Christmas. Last year they released Partridge in a Pear Tree, this year they released the second beer, after the second stanza.
The Beer: A 12% brew made with cocoa nibs, toasted pecans, caramelized sugar and a lot of caramel malts. It poured a pitch black with a thick dense head of cafe colored foam with small streaks of red in it. The nose is full of chocolate, coffee, yeast. The mouthfeel is robust, thick, coco, nutty, yeasty, candied sugar, some sweetness of front, but finishes star tingly dry. Fruity yeasts, figs and raisins. The alcohol is not apparently strong, but the beer is definitely body warming. Creamy and rich. A wonderful Christmas beer that has me eagerly awaiting the next 10 and curious as to how they'll interpret each verse. This one gets a B+ from me. Here's what the folks at BA had to say.
Posted by Barleyvine at 6:57 AM No comments:

As I've written in the last few days, I was in Denver for Christmas. Beyond visiting many breweries (I promise more write ups next week) I also made a run to a couple of liquor stores to increase by beer stash. One of the beers I picked up was a special beer from gypsy brewery Mikkeller. This beer was a collaboration brew between Mikkeller and De Struisse brewery out of Belgium. Oh yeah it has 130 IBU's!
The Beer: Beyond the IBU's it weighs in at 9.0%. It pours a hazy cloudy orange with a thick slightly off white head. The first sniff? Oh boy...there are hops yes, and maybe some pale malts, but there is something else...it smells sour, funky. A sip confirms, the beer has soured, oxidized...ITS GONE BAD! How did this happen I asked myself. I quickly went on line and checked out the Mikkeller website and found that this beer had been brewed once in 2007. So this information moves this post from being one about a beer tasting, to being about storage of beer in a liquor store. The store in question was Davidson's Liquor in Centinnial. I found the beer on the shelves, not refrigerated. Looking at the beer closer now, I can see the age in the bottle, the label is faded it looks almost as if the label had been sun faded. Now that I have all the information it doesn't surprise me that this beer could have gone bad. What irritates me is that Davidson keeps it in stock. I don't want to knock the store, in my many trips to Denver I've visited this place many times and have had great luck in beer (yes they keep their Pliny in the cooler). They've done a good job in the past, but here, they have failed considerably by keeping a beer for 2+ years. Nothing wrong with cellaring beer of course but its gotta be kept in the correct environment and this one was definetely not. Sad becuase it seemed like a beer I really would have enjoyed.
Posted by Barleyvine at 10:59 AM 2 comments: 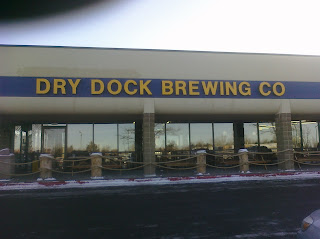 One of my favorite things to do when on vacation is to try and visit a local brewery, this is no problem whenever I am in Denver since they are everywhere. I've visited many of them during my visits there, but I was pretty excited when my brother-in-law told me about this brewery in Aurora a suburb of Denver. Dry Dock Brewing has been around since 2005. It was started next door to a homebrew shop by the owner of said shop. The brewer came over from a "local brewpub chain" (I think CB Potts). The brewery has gained some recognition lately when it won Small Brewery of the Year at the latest GABF along with a couple of other medals for their brews.
When we drove up we didn't know what to expect as the brewery is in the middle of a shopping center. When we walked in we were somewhat surprised by the nautical theme, but I guess with the name dry dock we shouldn't have been. The set up is pretty small with just a handful of small fermenters. They have limited bottling and are mainly set up as draft only operation. As with most times I go to a brewery I picked up a sampler tra 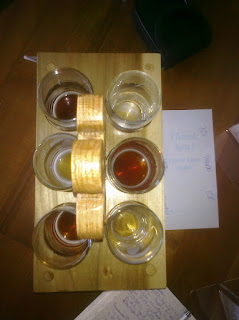 y (see pic to the right):
7 Seas Double IPA - 7 hop varieties (each start with the letter C) 8.5% and 90 IBU's. This one was incredibly hoppy, tons of grapefruit peel, marmalade, chewyness, toasty biscuits, very well made DIPA.
Three Heavy - Wee Heavy weighing in at 9.5%. Very rich malty brew, with notes of figs, and raisins, dark fruity, sweet and malty, but not cloyingly so. Another solid brew.
Barnacle Brown - Brown ale, smooth, mellow, some coco notes, but not a lot going on here, was hoping for a little bit more complexity.
HMS Victory ESB - 5.8%, 49 IBU. A little nutty, caramel notes, with some nice earthy hop notes, coppery, malty, a very nice English style ale.
U-Boat Hefeweizen - Silver medal winner at GABF. This one was a great beer, bannana, cloves, bubble gum, full creamy mouthfeel. A really wonderful hefeweizen.
HMS Bounty Old Ale - Another award winner from World Beer Festival, some nice malty caramel notes along with raisins, figs, maltyness, port like, but again felt it was lacking depth.
I also tasted their pale ale that my brother in law had, that we both felt was incredibly lacking in flavor and depth, tasted really one dimensional.
After the sampling platter I did get a snifter of their Naked Vixen which is a 9.5% Belgian Golden Ale. This was a pretty good beer golden colored with a thick pillowy white head, notes of pineapple, white pepper, yeasty notes, fruity, very nice.

Other beers that our party had was a porter that we all found somewhat wanting as well as their Vanilla porter which was not surprisingly a bit sweet. Overall I found Dry Dock to be a very solid brewery, but left somewhat disapointed due to its winning Small Brewery of the Year.
Posted by Barleyvine at 8:46 AM No comments:

What I did on my Christmas Vacation

Finally back in Houston, well actually I've been back for a couple of days, but this is the first time I've had a chance to sit down and write here on the blog. I hope everyone had a great Christmas and New Years. I know I did. What did I do? you ask. I went to visit my wife's family up in Denver. If you know Denver you know its a great place to visit many breweries and drink good beer, and that's exactly what I did. I visited some breweries I've never visited, and others that I haven't gone to in a long time. Over the next couple of weeks I'll do some individual write up's of the breweries as most of them deserve their own entry, but here is a list of the ones I was able to visit:
Dry Dock Brewing - Recently won GABF Small Brewery of the year.
Odell Brewing
New Belgium Brewing
Fort Collins Brewing
Oskar Blues Brew Pub - Longmont
Wynkoop
Great Divide

I was also able to do a big beer run while in Denver and picked up quite a few beers not available in Houston, as I drink those, I'll post my thoughts as well.
Posted by Barleyvine at 9:37 AM 1 comment: