Just as I did with beer and wine previously, as I get into enjoying more whiskey, gin, and cocktails, I read.  A lot.  I'm always on the look out for a new book on booze, or cocktails, or the history of drinks, etc.  So it was with pleasure that I picked up this book, whose stated purpose was to give a history of the rise of the craft distilling movement.  The book is written by James Rodewald, former drinks edited of Gourmet magazine.
The book is broken into different chapters covering different regional areas, different types of craft distillers, different types of liquor, etc.  There doesn't seem to be a major rhyme or reason to the different chapters, but they work as a whole.  For me the first chapter grabs you right off the bat: Unexpected Texas, and covers great Texas distilleries Balcones, Garrison Brothers, and Ranger Creek.  Each chapter is like this focusing on a few craft distillers of everything from Whiskey and Bourbon to Gin, to eau de vie and everything in between.  There is a brief history of how the distilleries started, the background of those involved, the struggles faced, the booze they make, and their hopes for the future.  While this book covers the entirety of the states, it's interesting to me how similar many of the struggles were: No state licensing for micro distilleries, no city ordnances, no laws regarding tasting rooms, or selling direct to public, etc.
Within each chapter there are always  couple of side bar pieces covering something specific to that story that give even more background on certain issues that may be challenging small craft distilleries.  There are also various cocktail recipes throughout the book each using one of the ingredients from the chapter.
For me I found this to be a very interesting book, especially looking at it from a comparison with the growth of craft beer, something I know a little bit about.  While there are some similarities, as the book specifically points out there is one big difference.  The growth of craft beer was a direct response to the relatively poor product that macro brewers were releasing.  The flavorless liquid in a can, gave rise to people wanting to experience pale ales, IPAs, sours, stouts, etc.  However, in the liquor world, the macro distillers are making some pretty damn good product.  Buffalo Trace is HUGE, but no one would say they are making flavorless swill.  So why is craft distilling growing the way it is?  I think folks these days enjoy something that is made well, local, and by hand, using local ingredients, etc.  And I think that's where craft distilling has found their niche.  That and doing interesting things with flavors in the case of gin and eau de vie.
There's another issue that is brought up again and again throughout the book and that is the definition of craft distillery.  I really want to talk about this, but I am going to make a separate post about it in the coming days as I think it will take some diving into to really explore things.
So if you're interested in better understanding your favorite local micro distillery, or why craft distilling has become as big as it is, check this book out.

Posted by Barleyvine at 8:05 PM No comments: 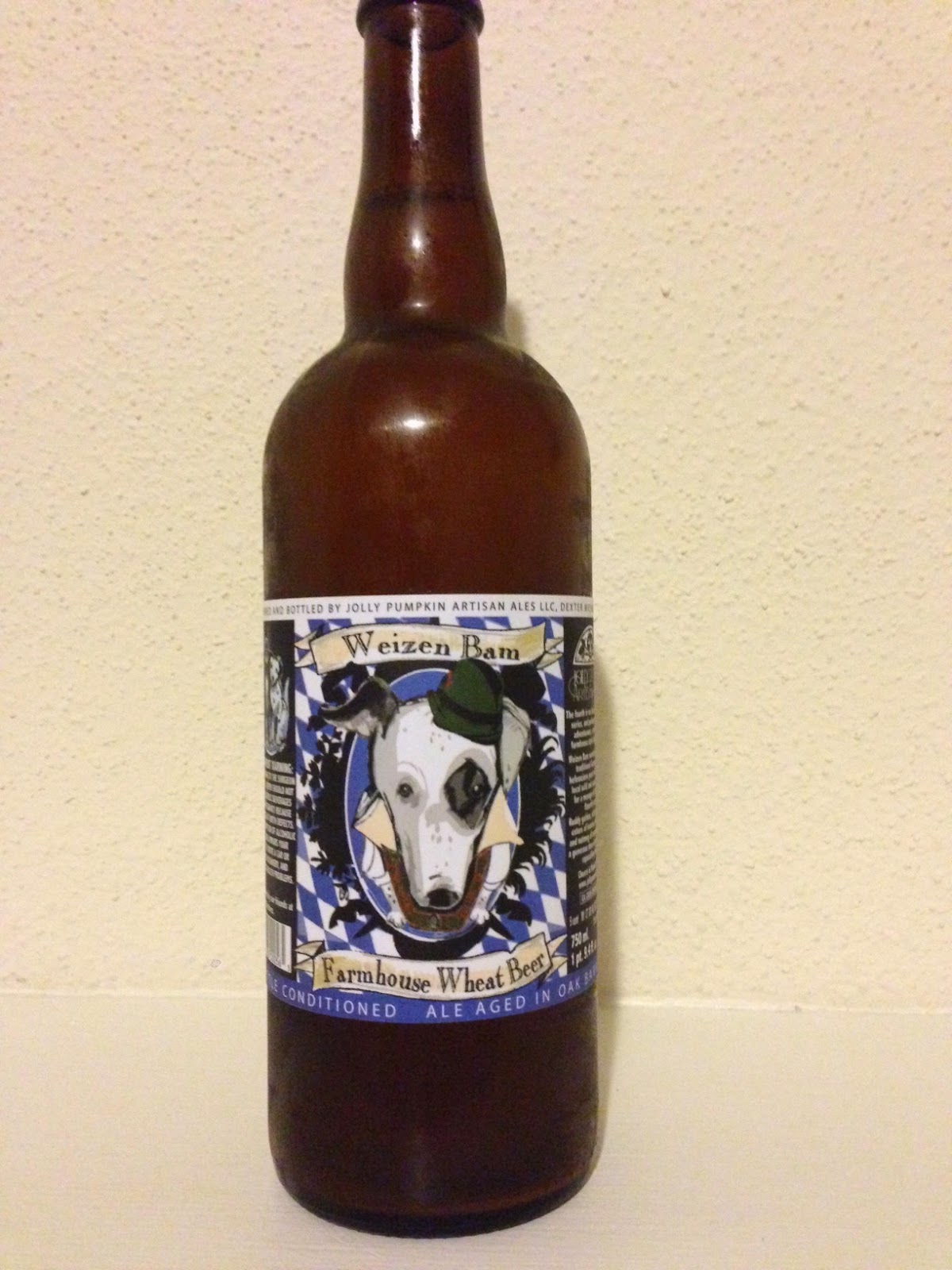 A day late, but not a dollar short.  This week's entry into New Beer Thursday comes from a brewery that I am incredibly excited is now in Texas, the great Jolly Pumpkin brewery out of Michigan.  Jolly Pumpkin is known far and wide for making awesome barrel aged sour and wild ales.  They've been doing it for a long time, well before it became THE thing to do.  Not only that, they do it extremely well.
This particular beer is a traditional farmhouse hefeweizen made with local wild and sour cultures and aged for a time in oak barrels.  Now a traditional German Hefeweizen pours a cloudy yellow, with a thick thick white head, and has notes of clove and banana on the nose and palate.  So with that in mind, I poured the beer.
It pours a bright golden sunshine color, not very cloudy at all.  Its capped by a thin white head that quickly dissipates into a thin film covering the surface of the beer.  The first whiff of the beer brings a hint of cloves and banana, the second brings a souring tartness, hints of barnyard, that one should expect from a beer like this.  The mouthfeel is thinner when compared to a traditional hefeweizen.   Good amount of carbonation, very bright flavors, tart, sour, barnyardy.  Some white pepper, and other spices appear as the beer warms.  Maybe cloves?  No banana.  This is a good beer, very enjoyable and drinkable, but what hurts it for me is calling it a hefe.  Right or wrong I have some expectations when I hear that, and this beer as good as it is, doesn't meet the definition of a Hefe for me with its flavors.  Good sour beer though.
Posted by Barleyvine at 3:15 PM No comments: