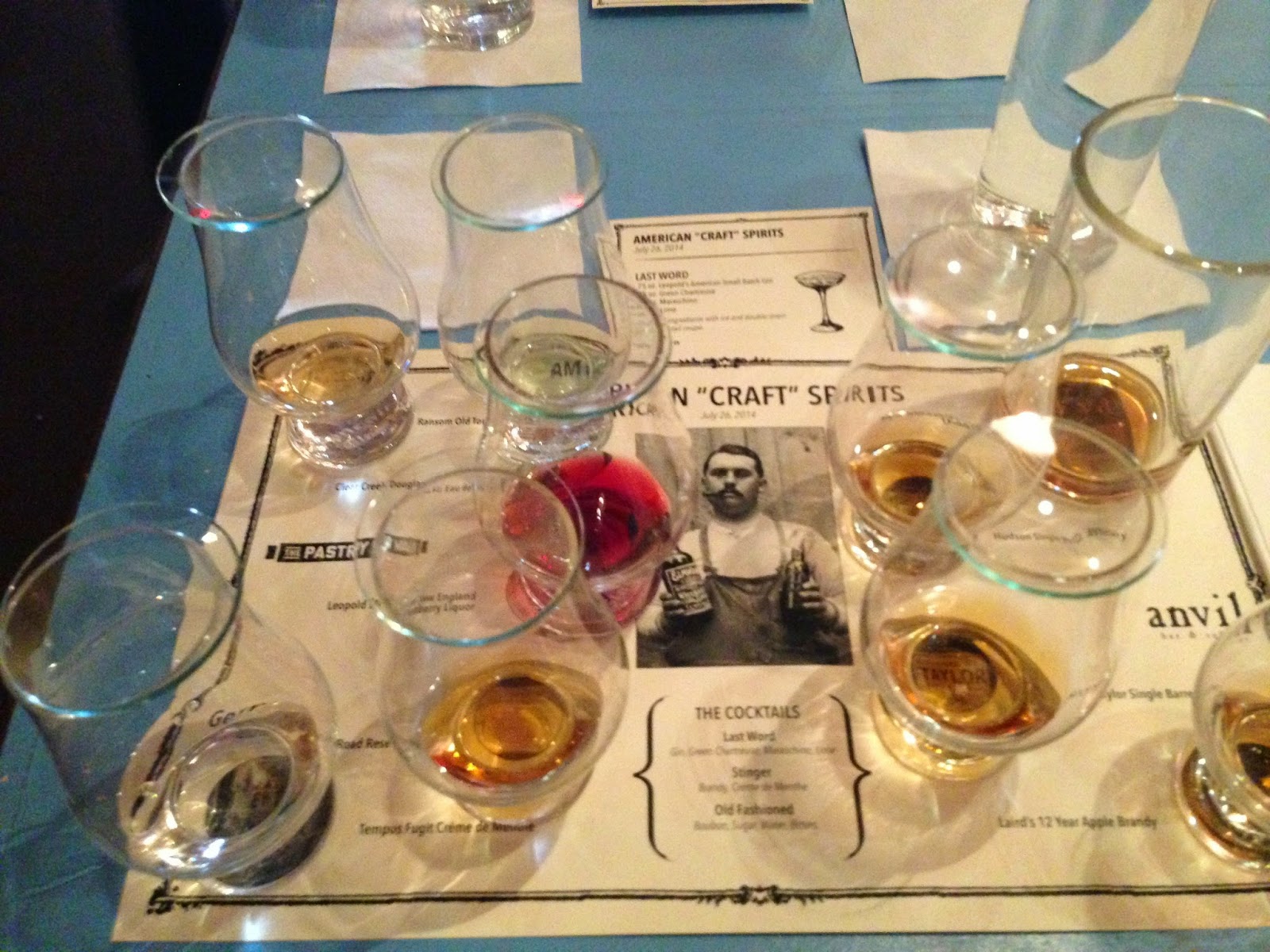 This past Saturday I took the opportunity to take part in the monthly cocktail classes hosted by Anvil and The Pastry War.  These classes led by owner Bobby Huegel cover many different topics, sometimes specific spirits, sometimes a certain theme.  The latter was the case this last saturday when I showed up in the long shotgun shaped bar Pastry War. The theme, "Craft" spirits.
As each person picked out their spot in the bar, we looked down at a place mat full of booze and one already poured cocktail.  The list of spirits we were to taste:

As I absorbed the list I could feel a smile spreading across my face, since many of these spirits I hadn't had a chance to try.  Which is one reason I went to the class.  I admit, that although I have ready quite a bit regarding spirits and cocktails, I haven't had as much opportunity to taste a ton of different things and I knew a class like this would give me a great chance to experience new tastes.

The class started with us starting at all those glasses filled with a spirit, and a Last Word cocktail (Gin, Green chartreuse, Maraschino, Lime) to start sipping while folks finished filing in.  Bobby started off introducing the class and discussing what craft meant.  This lead to Bobby getting on a bit of a soapbox (not surprising), of the many times spirits can call themselves "craft" but be far from what one would consider craft.  To me, this sounds just like the craft beer industry, where there is a lot of fake craft beer out there.  In the spirit world this often means labeling a bottle something like "Texas Whiskey" when the whiskey, may only be bottled in Texas, but is distilled and aged somewhere else.

After Bobby's discussion on craft spirits, we began tasting the spirits, starting with the Old Tom Gin.  Old Tom is traditionally a sweeter gin than the Dry British Gins like Beefeater, and this one from Oregon even saw a little time in oak barrels (about 3-6 months).  Bobby recommended using this for a cocktail like the Martinez (Gin, Sweet Vermouth, Maraschino, bitters).
Next up was the Clear Creek Douglas fir Eau De Vie.  First thing was to define Eu De Vie, which is Water of life.   This is a spirit that is infused with fir branches, and wow did it smell like it.  Amazing nose, but incredibly hot.  The one thing I kept thinking about regarding this one was how interesting it would be mixed into a base martini.
We then tried out the Leopold Cranberry liquor.  Leopold Bro's is from Denver, and makes some outstanding spirits. I am a huge fan of their gin, both regular and Navy strength.  Really outstanding stuff.  The cranberry liquor was dangerous.  Not to sweet, very little boozy flavor, and very easy to drink.  I could definitely see drinking this over ice, or in some wintery cocktail.

Next we tried our second cocktail of the night, The Stinger (brandy, Creme De Menthe), which was really interesting combination of flavors, but I did feel the creme de menthe tended to over power the drink.
We then tried the brandy and the creme de menthe separately.  I really enjoyed that aspect of the class.  Getting to taste the spirits independently, then combined helps you see how each spirit imparts their unique personality into a drink.
I am a huge fan of good vermouth, especially as a summer drink, just over ice, maybe with an orange slice, so I enjoyed the next tasting, even though I had tried Vya many times in the past.  One of the new waves of American Vermouths, this is definitely one to seek out.
Next up was the other spirit I had tried before, Hudson Single Malt Whiskey.  This is a good, albeit not cheap whiskey.  Definitely wasn't my favorite, but I've actually been underwhelmed by a lot of the Hudson offerings.  Not bad per se, but not something I would seek out for the price.
Now the last two offerings I was really excited to try, and when I had my first sip of E.H. Taylor's 12 year, I wasn't disappointed as this was a really enjoyable bourbon.  Smooth, just a tad sweet, a little heat, vanilla, oak, very very nice.  Once again, we were then able to try a cocktail that utilized the previously tasted spirit.  The cocktail presented to us was one of my favorites, and frankly one that every home bartender should know: The old fashioned.  In it's simplest form, its spirit, sugar, water (or ice), bitter.  In our specific case we had Weller 107, turbinado syrup, and Angostura, but really you can take most any combination of spirit, sweetener, and bitter and put your own twist on it.
Our final spirit of the day was the Laird's 12 year Apple Brandy.  I've had some Laird Applejack in the past, but never this offering.  All I can say is APPLES!  This was really delicious, and something you could easily sip on over ice, or neat, or put into some interesting cocktails.

All in all the class was incredibly enjoyable.  Bobby is a passionate host, that is more than willing to share some of his knowledge and have open discussions throughout.  I felt I left the class having learned a little knowledge, as well as gaining a lot of taste experiences which was my own personal goal.
The class was $55, included the three cocktails and samples of the spirits above along with a serving of tamales for each table.  I consider the class definitely worth the money, and I will keep my eyes open to attend classes in the future.
Posted by Barleyvine at 9:49 PM No comments:

Yeah, I know I've said it before, but this time, I think it might just stick.  I'm getting back in the blogging game, but this time it will be a little different.  During the time I stopped blogging, I actually stopped drinking as much beer (I know, I know hard to believe).  But don't fret, I didn't sit around and do nothing.  Instead I sought out new things, focusing in on cocktails and whiskey, gin and rum.  As I did with beer, I began reading copious amounts of books, buying different bottles of liquor and things to mix with them.  Trying out new combinations.  As I did with beer I sought out things I could do myself, and made a line of bitters that I could add to my cocktails.  This time away from beer, helped give me a greater appreciation for other things, that I had many times for one reason or another turned away from.
It has also given me more things to write about, which is one reason why I am back on here.  And to answer your question, NO, I am not going stop writing about beer, I am just adding things like cocktails, and liquor to the blog.  I may also throw things like reviews of coffee shops, cocktail bars, beer bars, etc into the mix as well.  Houston is seeing an incredible growth of late, in the addition of coffee shops or cafes, and more and more craft beer bars are popping up (it's not surprising that folks are riding the wave, but let's see if they are doing as good a job as some of the original craft beer bars are still doing).  I want to do what I have always done on this blog, write about things I love, whether it's beer, wine, cocktails, whiskey, coffee, food, Houston, whatever.   I'll give you my thoughts, and hope to hear from you as well.  Additionally, I'm going to try to keep track of the things that are going on around Houston with respect to cocktails, and beer on the right hand side of the blog under Happenings in Houston.  Lastly, if you know of good local blogs that I should link to, please let me know.
I'm glad to be back and I hope you enjoy the blog and the new focus.
Posted by Barleyvine at 7:48 PM No comments: