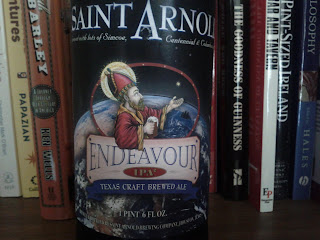 Ever since Saint Arnold moved into their new brewery its been interesting to see them trying new things with beers. First came the moveable yeast series and lately its been releasing beers in 750ml bottles instead of the traditional 6-pack. These beers they are releasing though are not just standard beers, but so far at least, they have been re-releases of some of their Divine Reserve Series. Their first big bottle release was only a seasonal release and was a version of Divine Reserve 9 called Pumpkinator. However, last week Saint Arnold releases a year round version of Divine Reserve 11 called Endeavour. Now, I was pretty excited for the release of this beer, for two big reasons. One DR11 was a fantastic Double IPA and as Endeavour it would be one of the first year round DIPAs made in Texas. The second reason was the name. Working in the space industry I think its pretty cool that a brewery has finally paid homage to an industry that gave Houston one of its nicknames.
The question remained though, was Endeavour a replica of DR 11, or like Pumpkinator before it were changes made to the recipe? Well it looks like its a replica to me. Both weigh in at around 8.6 to 8.9% and they both use Columbus, Simcoe and Centennial hops and weigh in at around 76 IBU. Now I did want to do a taste comparison, however, DR11 is almost a year old and most hop forward beers can change dramatically in that time since hops are the first thing to go in a beer. Just something to keep in mind when trying to compare these two beers.
DR11: It pours an orangish copper color with a thick head of just off white foam. Hops cones almost fresh from the vine show up on the nose, citrus, biscuits. I can't believe how well the hops are holding up in the nose. The mouthfeel is smooth and full bodied, still very hoppy, almost resiny. The hops though are muddled, not distinguished, but coat the tongue. There is almost a roasty flavor going on, roasted grapefruit marmalade anyone? Some boozy notes are apparent, and its just a little thin at the finish. Still a great beer, but one that I'm wondering if it isn't time to drink more sooner rather than later.
Endeavour: This beer pours a light pale orange copper, lighter than DR11. A thick head of white foam tops it off. Hops, citrus, resiny, peaches on the nose. Medium creamy mouthfeel. Really creamy, almost the texture of a beer that has gone through a nitro tap. Its tongue saturating hops, grapefruit, peaches, a hint of biscuit toastiness, and some white peppery spice. So tongue coating though, don't make this your first beer of the night, or you won't be able to taste anything else. The flavors here are so crisp and bright they pop across the tongue doing a little dance. A great DIPA, and I am very happy to see this coming from a Texas brewery.
Posted by Barleyvine at 5:40 AM 10 comments: