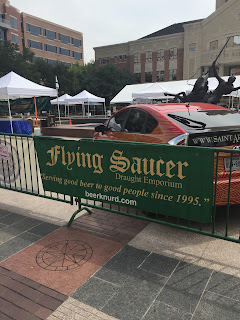 Last Saturday, the craft beer bar Flying Saucer hosted their annual Beerfeast in Sugarland.  There are different beerfeast's hosted by a number of different Flying Saucers around the country, but the one in Sugarland is the only on in the Houston area.  This was the 5th year for the event, and I've been twice before.  Once working a booth for Open The Taps which was their first year, and then once as just a guy drinking beer, which is what I was this last Saturday. 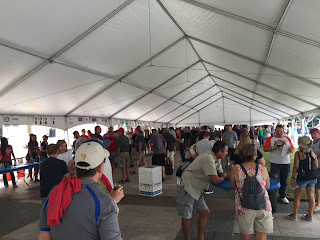 The festival boasted 50 craft breweries, and over 80 beers, and it seemed like more than that.  General admission tickets were $35 ahead, or $45 the day of (do some planning folks, no reason to get the tix the day of).  There were separate VIP tickets for $68, not available the day of.  The VIP tickets got you in an hour early and access to some special beers.  Each ticket gave you a card for 12 tasters, and you could purchase another card for $5.  This Saturday was a gorgeous day for an outdoor festival, which, you can't always be assured of.  For the VIPs the doors opened at 1pm, but for us plebes, we waited until 2 to get in. Before you enter you're handed a list of the breweries and beers to be served and it covered breweries from national craft beer brands like Avery, Boulevard, Dogfish, Deschutes, Firestone Walker, and Victory, to Texas brands like Saint Arnold, Karbach, Community, and even new comer Eureka Heights.  Additionally
the iconic Belgian brewery Cantillion was represented.  The lay out was simple.  There was one large tent that took over the back third of the Sugarland Town Square where he majority of the beers were served, there were additional smaller tents on the edges of the town square with sour beers, canned beers, pumpkin beers, rare beers (most of these were for VIPs) and Cask Ales. Lastly, Saint Arnold had their own large tent where they were serving some special beers, as well as 4 different Bishop Barrels and performing Beer 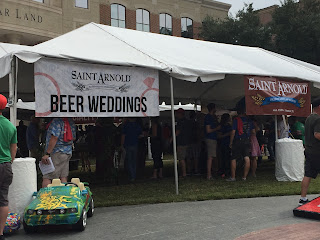 Weddings (whatever that is) conducted by Saint Arnold himself.  After getting one of the Cantillion beers (the Gueze, as the Kriek had already been kicked by the VIP crowd) I headed to the rare beer tent trying to get a taste of Brash's Hammer Smash Face a 15% barrel aged Russian Imperial Stout. It was then that I realized the rare beer tent was for VIPs, although later in the day I went back and they were serving everyone, but by then Hammer Smash Face was gone.  But no worries I did have a plethora of other outstanding beers to drink.  Some of the highlights included Deschuttes Pinot Suave, Brooklyn's Hand and Seal, Firestone Walker Velvet Merkin (FW was also serving Sucuba, Stickee Monkey, and Sour Opal), Oskar Blues HotBox (a tremendous coffee porter), and a few other ones.  I went with my girlfriend and we each tried each others beers so it was like getting to taste 24 different beers.  There were a couple of standouts that either blew me away or just surprised me.  First my girlfriend go Stone's 20th Anniversary Citracado beer that is made with avocado honey.  It sounds unusual and it was, but the avocado honey added this sweet green flavor, but the beer still finished hoppy and dry.  A really cool beer.  Another beer that I was impressed by was (512) Cabernet barrel aged Tripel.  Which is their 3rd anniversary Tripel aged in Cabernet barrels for a year which created a tremendous beers with fruity esters, oak, red wine, vanilla, and some tartness.  A surprising beer from 512.  Lastly, Saint Arnold served their Urbanhouse American Wild ale.  This was their saison finished with brett and aged in wine barrels.  This shocked me with how good it was, and was an almost perfect beer in my mind.  Beautifully balanced, nuanced, and flavorful.
Overall, I really enjoyed Beerfeast.  Its a smaller more intimate beer festival. No one was sloppy drunk while I was there, and you could move around, talk to some of the beer reps without shouting or constantly run into folks.  The lines for the beers moved quickly, traffic flowed really well, and as I've mentioned there were some tremendous beers available.  There were some negatives in my mind.  1) Not sure the VIP tickets are worth almost double the General Admission tickets.  One hour early and maybe a couple of beers that I didn't get to taste doesn't seem worth it to me.  2) They did run out of certain beers by around 4pm.  By that point most of the Firestone Walker beers were gone, so were a lot of the Prairie beers and some others, and the festival ran until 6.  Maybe they had more somewhere, but I don't think so as I was walking around for a bit and didn't see them replenish anything as I left by about 4:30.  So if you go next year (and you should), plan accordingly, and hit the rare stuff, big stuff, or popular beers early or you may be SOL.
I'll finish by saying this is a recommended festival for me.  $35 isn't too much to taste a bunch of good beers, and spend an afternoon with craft beer nerds.  Saucer always does a good job of bang for the buck in almost everything they do, and this is no different.  Also nice to see a festival like this out in the burbs and not downtown.
Posted by Barleyvine at 8:43 PM No comments: