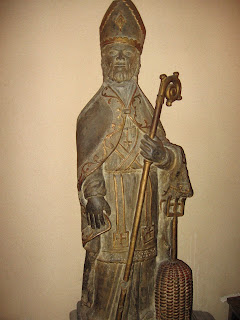 Thats right, its Saint Arnold of Metz, one of the Patron Saints of Brewing. While considered by many as the 'Real' Patron Saint of Brewing he is actually NOT recognized as such by the Church. However he was known to extol the healthy virtues of drinking beer instead of water. His famous saying is: "From man's sweat and God's love, beer came into the world." He also gave his congregation FREE BEER! His miracles came after his death. His body was being moved from Metz where he was Bishop to the location of his first Diocese. One of the bearers was overcome by exhaustion he prayed to God for beer to slake his thirst. No sooner than the prayer had been uttered when fresh beer poured forth from Saint Arnold's Casket.
The reason that Saint Arnold's has a special place for me is that it is the namesake of Saint Arnold's Brewery in Houston, one of my favorite breweries and by far my favorite in Texas. So when I visited Brussels recently and saw this statue I had to take a picture.
Posted by Barleyvine at 12:54 PM