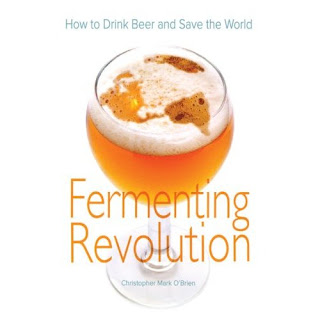 Besides drinking great German beer, there is another opportunity for me while I'm here. I get to catch up on some book reading. In between walking around the city, touring museums, and of course drinking beer, there's always good opportunities to read a book (even in a beer garden while drinking a beer!) around the city. I picked up Fermenting Revolution: How to Drink Beer and Save the world, by Christopher Mark O'Brien, right before I left for Germany. It was a couple of weeks before I was able to start reading it, and I finished it up last week. The thesis to the work is that by people supporting their local breweries instead of the huge corporate brewers, people support sustainable environments. Local brewers tend to use local ingredients for their specialty beers, tend to give back to their community, and use less energy (and therefore less fossil fuels) in getting their product to the consumers. I'll have to be honest, as this book leans WAAAAY different that I do. Not that I am a hard to the right wing kinda guy, but the author leans to a certain direction and that comes out in his book, sometimes to the detriment of his cause. Having said, that I did thoroughly enjoy the book.
The book does a decent job of covering the history of beer making, talks about how beer making was a Woman's job up until the 1500's or so when the men started to take it over. Through the story of American Prohibition, the rise of Industrial Lager, and Beervolution of the 70's.
Although at time one suspects he would rather everyone go back 1000 yrs where there was no technology and only people brewing at their homes, his general idea is a great one. However, there are some issues I have with the book.
There are some facts and figures that I am not sure where he gets them from. One of his most common quotes is that most Americans leave within 10 miles of a brewery. I find this hard to believe, since very few people in Texas, LA, OK, Arkansas, Mississippi, so on and so forth leave no where near a brewery as there are only a handful (if that many) in the entire state. I wish there were more, but there aren't. Throughout his book he touts the greatness that is Organic Products. While I agree that the more organic we can buy the better it is for the earth and ourselves I don't think he is being realistic. Unfortunately, right now organic isn't cheap, and its just not economically feasible for lower income families to buy organic, and its a subject the author doesn't touch on. He does the same thing when he talks about people using more energy efficient appliances. Again great idea, but until the prices come down its not always feasible for lower income families, who unfortunately can't think about the long term energy savings, they just need a Refrigerator.
Now on to the things I like. He accordingly does take the big brewers to task, from the late 1800's when brewers started using Coal and coal products to make their beer during the Industrial Revolution, thus beginning the pollution that we are fighting against today. However he does go into a lot of detail on the things that Coors, A-B, and MillerSAB are doing today to curb their wastes. Most of the big brewers are getting close to producing zero net waste which is an amazing statistic once you think how HUGE these corporations are. In fact Industrial breweries are the most of efficient of any industry. I like that he focuses on how local brewers are doing great things. From Saint Arnold's recycling all of their 6 pack containers and giving customers shirts, mugs, etc when they bring theirs back, to Great Lakes Brewery who uses the Fatty Wagon that runs on used french Fry grease and hauls customers from the brew pub to the baseball stadium (GREAT Concept).
Its a recommended book, that I thought was a fast read. Regardless of your political leanings, it gives you somethings to think about and if you weren't a supporter of your local brewery or brew pub you will be. In fact GO there, have a beer, and get a start reading the book.
Posted by Barleyvine at 5:31 AM