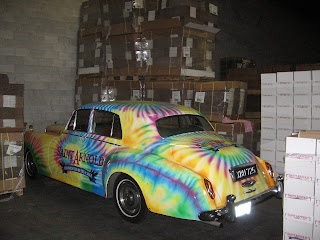 This past weekend the folks over at Saint Arnold's celebrated their thirteenth anniversary. It was an absolutely great time, full of great BBQ from local Goode Company (love that jalapeno bread), and of course great beer. After an hour or so of sipping on their fine Elissa IPA, and Lawnmower, I heard rumblings that they had opened up something special. Sneaking towards the front of the brewery I saw a small silver keg that the guys behind the bar were pouring half pints. When I finally made my way to the bar, I eagerly passed my pint glass to the tender, asking what this special elixir was. His reply made me giddy, it was their special Imperial Stout (a heftier version of their Winter Stout) aged in oak whiskey barrels. I had heard that they had made this, but since its only served at the brewery during special occasions had missed opportunities to taste it. It was a pretty amazing beer, full of espresso, cocoa, chocolate covered raisins, thick mouthfeel, with hints of vanilla and oak. A great beer. After having partaken in the beer, I ask Brock (owner of Saint Arnold's) if he minded taking me and a buddy around back to check out the Saint Arnold's Rolls (see pic above). Although I don't believe Brock's story how how they did the paint job (scrunched it up and tied rubber bands around it) it was nice to see the car. I also was able to get a semi small scoop from Brock. The next Divine Reserve will be an Imperial Stout (hopefully of the same recipe used in the Whiskey aged version). All in all it was a great night. So here's to 13 more great years of Saint Arnold's Beers. 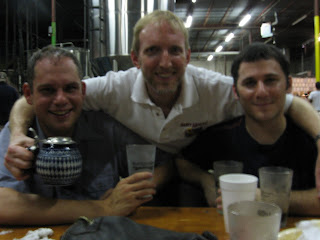 I've been enjoying your blog for a few weeks. I couldn't make it to the party, I was out of town, but the Imperial Stout recipe used for the next Divine Reserve will be based on the winner of a home brewing contest that Saint Arnolds sponsored.

Mike,
Thanks for the info. I'm sure its going to be a great beer.