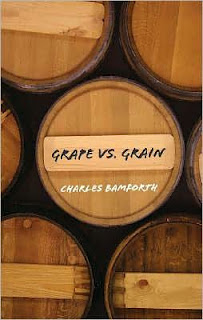 Recently there seems to be a big push to write articles, books, etc comparing Beer and Wine. Specifically promoting how beer is wine's equal. Heck, a few months back, Dogfish Head's own Sam Calagione released such a book with sommelier Marnie Old titled He Said Beer, She Said Wine. This book specifically talking about food pairings. A good book, however a new one has been released recently that goes beyond food pairings and really dives into the differences between wine and beer and what makes beer wines equal (if not superior in many cases). The author of the book is Charles Bamforth who is the Chair of the Dept of Food Science and Technology and Anheuser-Busch Endowed Professor of Malting and Brewing Sciences at U of Cal-Davis. I know that's a mouthful, but the point is, the guy knows beer and specifically brewing science. This book is not just beer vs. wine, but its purpose is to try and debunk myths of wine's superiority. His thesis I believe is the following quote of the book:

I [the author] seek to compare these two beverages on the basis of their history, technology, scientific and artistic appreciation, and impact on the body. To that extent, and reflecting on my professional speciality the theme of this book is primarily on of demonstrating how beer is a product of an excellence and sophistication to match wine, and I seek to do this my championing beer while being entirely fair to the other noble beverages.

A pretty noble thesis, and one that for the most part I feel he succeeded. The initial chapters discuss the components of wine and beer and then how each are created. This is really where the author hits his stride eloquently expressing how much more complex brewing is over wine making. The middle part of the book covers beer and wine quality and the various types. Nothing earth shattering here, covering things that most beer lovers will know (at least in regards to their favorite beverage). The last chapters of the book cover the health benefits of beer and the author ends on a high note here. Putting many studies all in one place he really does show that while there is nothing definitive on the health benefits of beer (nor truth be told is their of wine) beer is just as healthy as wine and does not deserve the derision it has received from various health nuts.
In conclusion, while many of the subjects within this book are covered in other places, the benefit of this book is capturing everything in one place while at the same time giving one something to fight back against your friendly oenophiles who tout the greatness and superiority of wine. This book gives one ample ammunition to fight back. There are periods of highly technical jargon that can bog down the reader, but over all its a fun and entertaining read. You will definitely learn something, if no more than how good and complex that glass of beer really is.
Posted by Barleyvine at 4:55 PM