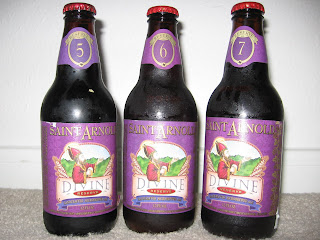 As I mentioned Saint Arnold's Divine Reserve 7 has been released and I decided to celebrate that release in a special way, by doing a tasting of several DR's. For the tasting I got together DR's 7, 6, and 5. I figured this would be a great way to experience the new DR and at the same time seeing how other DR's have aged over time. So let's get to it. 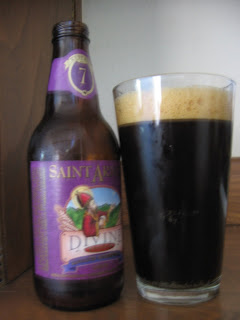 Divine Reserve 7: This is of course a weizenbock that weighs in at 8.7%. It pours a deep almost pitch black (see pic on the right) with a tan colored thick foamy head. The nose on this one has lots of banana, wheat, roasted malts and nutmeg. The mouth is chewy and thickly coats the tongue. There are flavors of banana's, munich malts, nutmeg, and rye bread flavors. There is a little bit of alcohol burn. As I mentioned yesterday I got to try this on tap at Gingermans, I actually think its much better out of the bottle, smoother, less harsh. Its a very rich beer, something that I think will lighten up as it ages. This is a great beer and gets an A- from me. Here's what the folks at BA think.
Divine Reserve 6: This is the American Barley wine. Here is my review from when I tasted it on June 12, 2008. The beer pours a cloudy brown with a thick taupe colored head. The nose is of hops and sweet roasted malts, citrus and earthy note 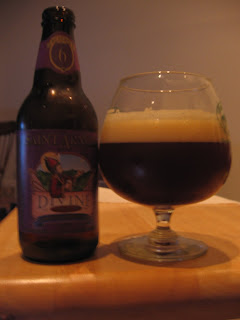 s, yeasty even. The mouthfeel is thick, resiny from the hops with a great big wallop of roasted malt flavors, raisins and figs. There is some caramel sweetness but not as much as I remember before. While hops are still at the forefront, malt flavors are coming up in a big way with this beer. I actually would LOVE to have this beer aged in oak and try it in a year, I think it would be absolutely amazing. Continuing my local eating and drinking I actually had this particular beer with some local cheese, the Veldhuizen Bosque Blue Cheese and it paired really really well.
The Divine Reserve 5: The last one and its the famous Russian Imperial Stout. Again here's my review from the first time I had it on September 09, 2007. Yes it's made it a year, it was difficult not to drink it! This one pours an absolutely pitch black with a dark crema colored head(sorry about the picture quality on this one). The nose has an extreme amount of roasted malts, coffee, dark bitter chocolate. It has a 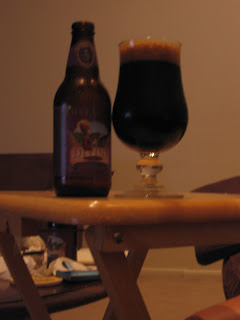 chewy mouthfeel a little chalky with flavors of cocoa, burnt malts, dark chocolate covered espresso beans. Very malty. There was no alcohol burn this was one smooth beer. There is some bitterness from the richly dark roasted malt flavors but it adds such a deep complexity. This may have been one of the best beers I've ever had, better than the first time. My wife and I shared this beer with some local cheddar that was actually made with this Divine Reserve. Unsurprisingly this was an absolutely wonderful pairing.

This was a really interesting tasting, not a true vertical of course, but extremely insightful for me as it was the first time for me to taste a beer that I had aged. It was my last DR5 which makes me sad, but I've hopefully put enough DR6 and 7 away to continue these tastings as subsequent Divine Reserves come out.
Posted by Barleyvine at 8:34 PM