My trip to Colorado

I stated a couple of weeks ago that I had the opportunity to head to Colorado for a special family occasion. However, while there I was able to visit a couple of breweries just as I always try to do when heading to CO. Instead of writing my traditional: this is what I did, this is where I went etc...I want to take this post in a different direction. I want to discuss the breweries I went to and what I saw, but I want to put it into context as a comparison of what is wrong with Texas law's and how its hurting Texas Breweries, the Texas Economy and yes, even Texas Tourism. The best part? Its an easy fix.
During my visit, I headed up to Boulder to visit some breweries. We hit two that got me thinking about this post, and it's those two that I want to discuss. Both are very different, but very applicable to the Texas brewery scene.
The first Brewery we went to was the great Avery Brewing. Before heading to the tour, 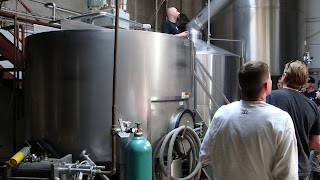 we stopped by the tasting room. It was pretty full of customers on a Sunday afternoon. Some seem to be spending the day playing games, drinking one of the many beers on tap, and just hanging out. Others were, like us, there for the tour. It was here that I got a chance to taste Avery's new barrel aged beer Depuceleuse, aged in Zinfandel barrels (I was also able to pick up a few bottles). After a few more tastings and a pint for the road, it was off to the tour. The first stop along the tour was the Mash Tun and Fermenters. I was absolutely shocked by how small Avery brewing is. A single tiny mash tun and not that many fermenters; each much smaller than anything that Saint Arnold's has. When I ask 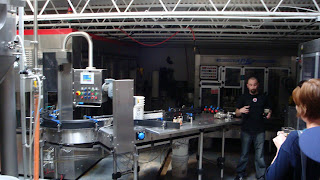 ed our guide how big Avery was, they replied that they just passed Microbrewery status (15,000 bbls) and are now around 18,000. This is much smaller than I expected Avery to be, but am still pretty happy that we are able to get so many of their great beers in Houston. After the mash tun and fermenters, we headed to the bottling line. Again, this was a pretty small operation and, along with their labeling machine, is run by 2 or 3 people. After the bottling line we headed over to the barrel room. This was absolutely the highlight of the tour. The barrels were floor to ceiling with many different labels. Some originally he 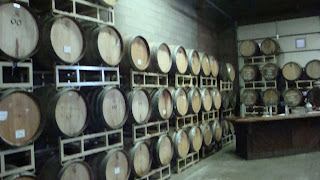 ld Rum, Whiskey (CO local Stranahan's), different types of red wine, and different types of white wines. Many of these barrels had white sheets of paper on the front that carried the history of the barrel and what had been in each one, along with owner, Adam Avery's, thoughts on the beer that was aged in side. It was also in this room that I received the inspiration to write this post. I asked our tour guide ab 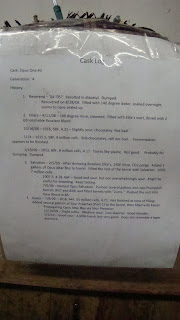 out the size of the brewery, and how they planned to expand since they were basically land locked in an industrial complex. The tour guide said that by using the money they make in the tasting room: proceeds from selling bottles, merchandise, samples, and tastings, they were going to be able to buy a place and custom build a brewery in the future.
Compare this situation with that of Houston's own: Saint Arnold's. How were they able to build a new brewery? Obviously not by tasting room sales of beer, but more than likely by their contract brewing agreement with BJ's Brew Pub. This contract has probably allowed Saint Arnold's a much higher in-flow of capital than would otherwise have been possible.
The second brewery we went to was brand new and very tiny: Asher Brewing Company 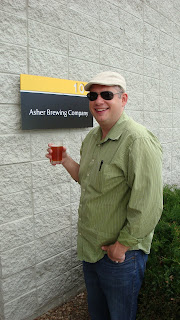 , Colorado's first all organic brewery. Another small brewery tucked into an industrial park, but when I say small, I mean teeny tiny! When you entered the door you came face to face with the bar, a small sitting room to the right, a few taps behind the bar, and then a door leading to the brewery itself. I asked the brewerr, who happened to also be manning the taps, if I could take a step back. I headed through the door. I saw a mash tun and a couple of fermenters among other things, and that was it. No bottling line or anything. I came back to the bar, and ordered a sampler of their beers - A wheat, IPA, DIPA, and Green Monstah (strong Ale). While I wasn't a huge fan of the wheat beer, the other 3 were very good. Extremely hop forward, with the Monstah having a wonderfully balanced maltiness. After ordering a pint of the DIPA, I took a seat at the bar and spoke with the brewer for a little bit. Currently they are keg only, but are using the proceeds from their tasting room and selling to local bars to purchase a bottling line (which they were going to be doing in short order). This brewery is only 3 months old, and already were able to see a huge benefit from their tasting room. While I was there, 5 or 6 people came in to sit at the bar and drink, and a couple of folks came in to fill some growlers to take home.
Now compare this scenario with that of new upstart Austin Area brewery Jester King. These guys are making some killer beer, but to start their brewery up they had to raise tons of money. They couldn't rely on starting as small as Asher brewing and use things like a tasting room to build up funds.
So what simple things could Texas do to help our local breweries?
1) Allow breweries to operate like a bar. They don't have to serve food, but wouldn't it be great to stop by a brewery on the way home from work and have a couple of extremely fresh pints? If they wanted to, they could offer chips and nuts, but you don't need to do much more than that. Neither Avery or Asher did and I would say they were very successful in getting folks in for a pint now and again.
2) Allow breweries to sell their beer on site. Imagine being able to go to a tour of the brewery and pick up a six pack or bomber of special beer to go. This is something that has been in work for many years and hopefully this next attempt it will pass. Not only does this help the breweries, regardless of what you may hear, it doesn't hurt distributors for a couple of reasons: 1) The beer breweries sell is not at a discount. Just like wineries, they do not undersell their sellers. Ask CO, CA, or OR distributors and see if they have been hurt by breweries selling some beer on site. The answer is a resounding NO. 2) By not underselling their beers, the breweries are able to get a higher percentage of profit off of those beers, which increases profit margin.
3) Allow breweries to sell Growlers to go. This works similar to allowing them to sell six packs, but also allows a customer to get something that may be offered keg only. There are some breweries in Texas that are keg only, like Live Oak, that would benefit greatly from this for the same reasons as mentioned above.
By doing these thing's how does it help Texas? States that have a strong microbrewery culture also have a strong culture of beer tourism. By making it easier for craft breweries to succeed, you help the economy and tourism. For example, I can go to the Denver area and hire a Brewery guide that will take me to dozens of area breweries, allowing me to pick up some special beers along the way. The same goes for places like San Diego and Portland. Look at Austin! There are many area breweries and more (like Jester King) on the way. Imagine a beer bus type of touring van that took folks from out of state to local breweries, allowing them to buy some beers, take them back to their home state, and talk about how great Texas Beer is. This brings even more folks back into the state, starting the whole process over. Texas has done an outstanding job of supporting the wine industry, and wine tourism has brought a ton of money into this state. When the economy is hurting, and taxing things left and right isn't the answer, shouldn't the state stand by the craft brewer's and at the same time bringing more money to the state coffers?
Posted by Barleyvine at 4:33 PM

Great post. I couldn't agree more on all your points. It would be great to be able to buy beer at local Texas breweries. Let's get these laws updated, who do we call?

Write your congress person! Thats the number one thing. Tell them how much this type of thing means to the state. Be polite and frame it in how it helps the economy. Support congress people that are NOT in the pocket of big distributors because they will be bought.
If you can monetarily support good folks for congress (becuase it can't hurt).
When you see these bills go in front of TX legislature write a letter to the local newspaper, talk to others about this bill, help get info out.

Great post, I am going to have to check out Asher Brewing...Avery is one of my favorites!

Great post! I am going to have to check out Asher Brewing...Avery is also one of my all-time favorites, plenty of good times in their tasting room!