The Tale of Two Ruffians

If you've read this blog any amount of time you know I have a soft spot for Colorado beers. This is mostly due to my wife being from there and me having had a chance to taste a lot of beers from that state, including some that aren't available in Texas. This is one of those days, where I'm comparing a version of a beer that we get in the state against one we don't. Old Ruffian is Great Divide's barley wine.
09 Old Ruffian: The specs: 10.2% and 90 IBU's, bottled Dec 10 2009. This pours a brownish color with a thick dense head of taupe colored foam. The nose is full of malts, toffee, treacle, caramel, and hops along with a bit of alcohol. A creamy mouthfeel, malty up front then slammed with citrusy hops at the finish. With the next sip you get notes of toffee, caramel, raisins, before finishing even more resinous, sticky. Lots of grapefruit notes, hops are very prevalent but there is a strong malty presence here that does bring some balance. This one gets a B+ from me. 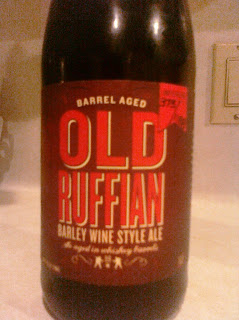 09 Bourbon Barrel Aged Old Ruffian: The Specs: 10.0%, 90 iBU's aged in Stranahn Whiskey Barrels. Hand numbered and I have bottle 375 of 1188. The beer pours a dark cloudy brown with a much thinner head of taupe colored foam. Malts and treacle, toffee, with undertones of oak, vanilla, and bourbon. Hops are very subdued here. Creamy mouthfeel, very little carbonation, some notes of wet cardboard that indicate some oxidation of the hops. Lots of caramel, vanilla, oak and bourbon, again very little hop flavor here. A little boozy. A little disappointing. I was really hoping for a bit more of hop flavor, but the hops have mostly left. A good beer though that gets a B from me.
Posted by Barleyvine at 6:36 AM