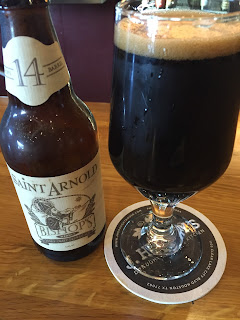 For my money, Saint Arnold has one of the most exciting barrel programs of any brewery in Texas.  They have continuously brought out top quality barrel aged beers.  Some of these are tiny one offs available only at the brewery, others however, become part of their Bishop's Barrel series, the latest of which, number 14 was released yesterday.  As with all Bishop's Barrel this one is released not at retail shops, but at bars only.  If you find it a bar that just does beer and wine, but not liquor you can usually get one to take home and cellar which is always a good idea.
The base of BB14 is a Russian Imperial Stout, the same recipe that they used for their terrific Divine Reserve 5 and 15.  They took that base beer and put it into Woodford Reserve bourbon barrels for 11 months.  This helped take the alcohol of the base beer from 10.1% to a whopping 12.1%.  They then blended the beer with Java Pura espresso.
When I heard that BB14 was going to be released yesterday I made it my mission to get a bottle (or two), and did so at the wonderful J. Henry's in Clear Lake.
The beer poured an almost completely opaque black with a cafe colored head.  The nose was boozy, tingling the nose with alcohol fumes, notes of coffee and vanilla from the barrels penetrated the alcohol.  Chocolate, oaky notes came on the second whiff.  Some dark fruits were there as well.
The beer was slightly warmer than I would have liked, but the mouthfeel was medium to full bodied, not quite chewy.  Some boozy notes hit me at first, but as I slowly sipped, I started to pick up the other flavors, coco powder, chocolate, a light flavor of coffee, although this was slighter than I thought it would be based on the nose of the beer.  Vanilla notes come out on the finish giving the beer a sweet note, but not too sweet since there is also some oakyness to help dry things out.  There is a burn of the alcohol too, that isn't unpleasant, but lets you know this is a BIG beer.  And yes, it is a BIG beer, but its also incredibly well balanced.  Oaky, Vanilla, chocolate, sweet, dry, subtle coffee notes.  Its a wonderful beer that will age incredibly well.  If I had to pick some nits, I'd wish for slightly more coffee notes, and maybe just a bit more mouthfeel.  Not much, just a smidge.  Overall another fantastic Bishop Barrel release.
Posted by Barleyvine at 8:12 PM