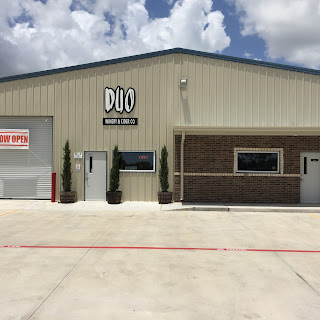 As I've written a number of times recently, the Clear Lake area is really booming when it comes to breweries.  From Galveston to Webster, there have been a number of new breweries popping up.  However, there hasn't been anyone making cider, not in this area at least.  That's not really surprising really, cider has been around for hundreds of years, and although its popular in other countries, its never had a huge market here.  That is slowly changing as peoples tastes change and develop, cider producers around the country are producing some really interesting things, with brett, or bacteria, or utilizing barrels to change and enhance the flavors.  There are a few cider producers in Texas like Argus out of Austin or Bishop out of Dallas, but this area really hasn't seen anything like that.  That has now changed.
A couple of weeks ago Duo Winery & Cider Co, opened its doors down in Dickinson near Texas Beer Refinery, and this past weekend, myself along with a few friends were able to stop by to check things out. 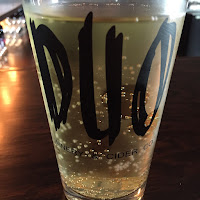 Duo has an interesting background and is starting with an interesting concept.  Duo is owned by a husband and wife team and they are partnered with a winery from Michigan (which is owned by the wife's step father). So the wine and cider they are serving right now are all produced in Michigan which was a little disappointing as I had hoped that there would be things produced in house.   However in talking to the owners, while they are currently bringing in cider from Michigan, the long term plan sounds a bit more up my alley.  They will eventually move to importing only the apple and cherry juice from Michigan, then fermenting those to make all the cider in house.  On top of that they will then look to Texas and the surrounding area to produce more local ciders, and seasonal rotations.  So their current set up is more of a transitional plan and not the long term plan. It sounds
like though, the wines will continue to be Michigan state wines, that are rebranded under the Duo label.  The day we were there, the only cider they had on tap was the apple as they were still waiting for the cherry to arrive.  The apple cider is well made.  It's very effervescent, crisp, and clean, some nice sweet and tart flavors, but finishes relatively dry.  Good solid effort that makes me excited to try the cherry. 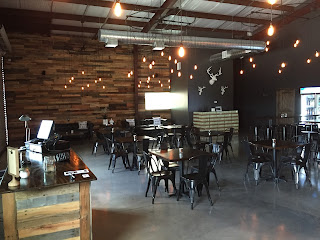 Duo is a beautiful space inside which was surprising when you pull up to it and see the warehouse exterior.  It will a fun space to hangout enjoy wine and cider.  it will definitely be an event space for sure.  While I'm honestly not overly excited for what Duo is doing right now, I am excited to see where they go especially when they start producing ciders in house.  For now its a fun place to hang out as their current line up of wines and cider are good solid efforts and different from anything that is being produced in the area.
Posted by Barleyvine at 8:02 PM