Book Review: Beer: The Story of the Pint 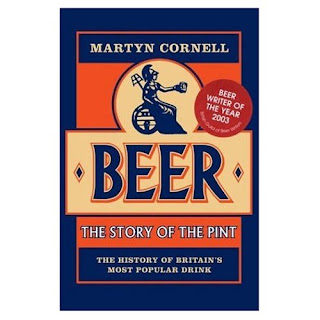 Martyn Cornel’s book, Beer: The story of the pint is not a new novel, having been published in 2003, but it’s a book that I picked up before my trip to . Something that I thought would help pass the time. Its quite an amazing book, with some really strong points, and some other things about the book that drive me crazy. Its an award winning book having won Beer Writer of the year the year it was published from the guild of beer writers. The synopsis of the book is tracing the history of the pint from the beginnings of beer back in the days of Mesoptania, to current day with pub’s that close at 11:00 pm. It’s a pretty big task, and Cornel makes a valiant effort and goes into minute detail on the history of beer in ..sometimes too much and I think that’s where a lot of the fault in this book lies. For instance he gives a lot of detail on the price of every type of beer to the point that its dizzying starting from the 1500’s until today. I’m an engineer and it was very difficult to keep track of the numbers and really there wasn’t much of a purpose to it. The other issue that I had with the book, is there are a lot of points that he jumps from topic to topic with zero transition. He will be discussing the history of Whitbread in one paragraph then goes directly into the history of CAMRA with no transition, and it was a bit disconcerting, like I flipped one too many pages. My last complaint with the book was that I felt he dealt too little with CAMRA. For stating (correctly) that CAMRA is probably the greatest example of Consumer Advocate groups ever he only discusses it for 3 pages then its never brought up again.

As for what I enjoyed the details that he went into, the historical perspectives, the stories about the men that created the breweries of yore and the brief story about the men that started CAMRA. One of the best parts of the book is at the end. The author ends hi novel with a series of appendices covering a fascinating range of information. The first appendix covers some popular myths. Basically the author debunks widely reported facts as myths picking them apart piece by piece. Its quite fascinating actually. The other appendices cover beer lexicon, as much of it is British in nature I found it rather useful. All in all a good book, with some very in-depth (maybe too much so) information that is put together in a very easy to read format.

Posted by Barleyvine at 3:09 AM