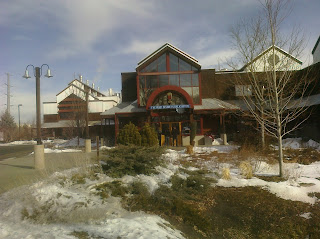 Back in December I was in Denver visiting my in-laws. While there I did what any beer lover would do: visit some breweries. We spent one day up in Fort Collin, CO, home to New Belgium, Odell Brewery, and Fort Collins Brewery. It's two of these that I really want to talk about today.
The day we went up to Fort Collins, the first brewery we hit was New Belgium. I had been to this brewery about 5 or 6 years ago, but was excited to see it since I knew they ha

d done some expansion in that time. New Belgium not only makes good beer, they are also a good company. We started the tour in the tasting room, before heading up stairs to see their mash tun, lauter tun, Pre-Run Vessel, and kettle. While here and sipping some Le Fleur Misseur the tour guide talked about the company. After working there for a year each employee gets a bike that they can ride to work (even though it was pretty cold this day, there were a lot of bikes out front), after 2 years they are offered ownership within the company. This last part is huge in developing a company that truly cares about the product. Secondly NB is one of the first (if not the first) to be significantly operated by Alternate Energy, whether solar, or wind powered. They have also developed comp 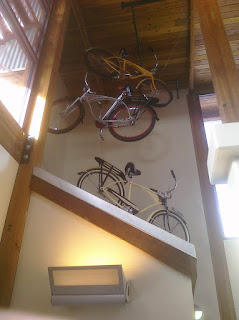 lex system as part of their brewing process that reuses materials, or energy created in previous steps of the brewing process to help power later steps. To pay for the equipment it took to put this process together the employees agreed to forgo a couple of years of profit sharing which to me shows how much the company and its people care not only about what they are doing, but how they are doing it.
Its not all about the environment, its also about their growth. They are currently in 26 states, and they've got a new bottling line (the old one went to New Glaurus) that allows them to fill 700 bottles/min. Not only is NB bottling of course, they are also canning. I found out something interesting about the canning process of the ubiquitous Fat Tire. Unlike the bottled version, the canned version is "canned condition" which leads to a fuller taste. Unfortunately I have not done a side by side comparison to find out how they differ in taste, has anyone else? 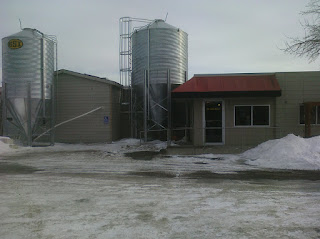 From New Belgium we headed to a brewery that I had not only never visited I had never had any of their beer: Fort Collins Brewery. I had seen their beers in the Denver Stores, things like Kidd Lager, Z Lager, and 1900 Amber. None of these really ever excited me, and frankly their labels were pretty weak looking. Well I learned never to judge a book by its cover. The Kidd Lager is a delicous Schwarzbier, Z lager? A rauchbier, and a very good one at that. The IPA was very good as well. All of these surprised me in their depth of flavor and drinkability. FCB actually has a pretty good even unusual line up of standard beers (a raucbier and black lager standard who else does that?). They also had some brews on tap that were special. My favorite and the most unusual was a steinbier. Whats a stienbier you ask? The beer is brewed using heated stones placed into the boiling kettle. The addition of these stones heated the wort to boiling. In addition these stones acquire a layer of caramelized malts which when placed into a second vessel helps stimulate additional fermentation. Its an unusual process that created a beer unlike one I had ever had. It was a basic lager, but with some unusual undertones in the flavor. Caramel yes, but also stoney and minerally, very good, delicious. All in all my trip to FCB was one of my favorite, not because all the beers were amazing, but because it opened my eyes up to a brewery I had not tried. That right there is one of my favorite reasons to go to brewery tours: the opportunity to try and be surprised by something you otherwise wouldn't have.
Posted by Barleyvine at 4:12 PM