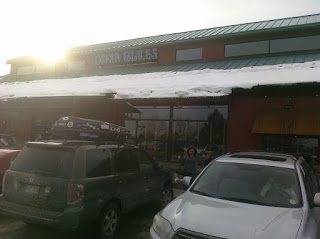 I had this beer back when I was in Denver over the holiday's. As I mentioned in earlier posts we had the chance to hit up a few breweries up in Fort Collins, on our way back to the city we stopped by the Oskar Blues brew pub in Longmont. This has place has some really great food, but it also has an amazing guest tap list and it was here back along the wall that I saw they were offering RR Consecration. Living in Texas I jump at the chance to have anything from Russian River and this day was no exception.
The Beer: Consecration is a dark Belgian style ale aged in Cabernet Barrels. It weighs in at 10.0% abv. It was poured into a 12 oz snifter. Deep dark ruby read with a thin white head. sour cherries, oak, vanilla all on the nose. The mouthfeel is shocking. Effervescence, sour, just mouth jolting taste bud slamming sour. Oak, caramel, tartness, incredibly wonderful. Something new that would shock BMC drinkers, it expands one's thoughts of beer. It makes you sit down and contemplate the meanings of things..meanings of beer, life, LOST, anything. Having said that, its a wonderful beer...in small doses, I couldn't imagine drinking more than the 12 oz that I had at one sitting, it would be just too much. A great beer that gets an A- from me. The folks at BA love it too.
Posted by Barleyvine at 6:52 AM

Actually going to the Russian River brewpub in northern California and sampling their stuff on-site was one of the better moments of my life.

Mmm … Pliny the Elder. (And Pliny's really just the tip of the iceberg.)