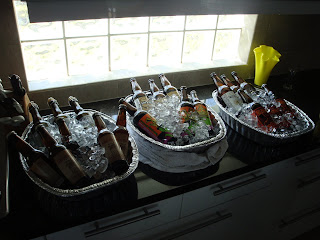 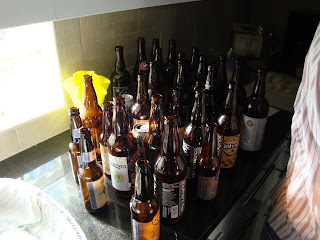 Foothills Sexual Chocolate: A coco infused Imperial Stout that weighs in at 9.75% abv 85 IBU's. Again pouring a pitch black with an almost reddish tinge to the tan head. The nose is of coco, malts, dark chocolate. The mouthfeel is thick and creamy. The brew starts off really well with dark bitter chocolate notes, roasted malts, espresso beans, but the beer finishes very acidic that I didn't really care for.
Southern Tier Hoppe: An imperial extra pale ale this one weighs in at 8.5% and poured a pale yellow. Very hoppy citrusy nose. The mouthfeel is medium bodied, flavors of green or fresh hops, pale malts, citrusy, bitter grapefruit pith. I'd call it a good IPA.
Southern Tier Creme Brulee: The last Southern Tier of the tasting. It weighs in at 10.0% and pours a very dark black with ruby red streaks. The nose...holy cow the nose, its smells of fresh baked cake, chocolate, vanilla, breadyness. The first flavor? Its LIQUID CAKE! Medium bodied, notes of vanilla, chocolate, creamyness. Its sweet, but its not cloyingly so. This would go so well with ice cream its ridiculous. Wonderful beer and after the ones I've tasted tonight I really need to get some Southern Tier beer.
Bell's Expedition Stout: This is my first run in with this Michigan brewery. Although I am familiar with their work, I've never had the chance to try their beers so I was pretty excited to do so at the tasting. This one weighs in at 10.5% and pours a very dark black with a cafe colored head. Dark chocolate, malts, raisins, on the nose. Full mouthfeel with some alcohol burn. Flavors of coffee, chocolate, raisins, roasted malts, creamy chewy goodness. A very good solid Imperial Stout I really enjoyed this one.
Great Lakes Barrel-Aged Blackout Stout: An oak aged stout weighing in at 9.0%? Yes please. This one pours a black with a taupe colored head, smelling of roasted malts, vanilla, oak. The mouthfeel is medium bodied, strong flavors of whiskey here. Although the label makes no mention of this being whiskey barrels that the beer was aged in, the folks at my table all agree, that there was. It was almost too strong, but still made for a pretty good beer.
Dogfish Head World Wide Stout: Another beer that I have had before, and frankly wasn't that excited about as my first time wasn't all that enjoyable. It pours a very dark brown almost black. Its portish on the nose, hints of vanilla, coco, raisins, malts, alcohol. Full bodied mouthfeel, raisins and figs, an almost sour tang at the finish. Sipping this, treating this beer like a port, I actually started to enjoy it this time around, which makes me happy that I have 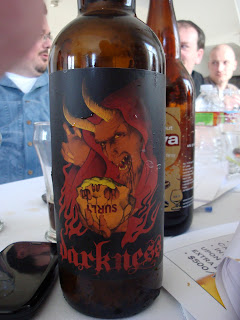 another bottle aging.
Surly Darkness: The last beer of the night, and of course the one I was really excited to try. I've heard lots about this brewery from Minesota, but never had the chance to try much from them other than quick tastes at GABF. This of course is their Imperial Stout that weighs in at 9.8%. It pours a dark deep black. The nose is of malts, chocolate, coffee, malts, smells like a package of whoppers. The mouthfeel is full, and it tastes like whoppers! Wonderful creaminess, chocolate, rich malts, vanilla. Rich, delicious, smooth, easy drinking for what it is. I really like this beer.

Another great event hosted by Cathy and her team at Live it big. Thanks to her and Kevin for an awesome evening of great beers. Can't wait till the next one. Not only are these fun for tasting beers, but they are great ways to meet fellow beer lovers in Houston. It was nice to meet all those folks today.
Posted by Barleyvine at 8:39 PM

Good read... made me thirsty... thanks for sharing.

How did you get that written up so fast? I'm just going point my summary of the event at your blog. It was a great time, good to see you again.

Definetely a great time. As for the post just decided to go ahead and get it done. Took me longer than I thought it would though.