30 years ago this year a little brewery in Chico, California opened, their first beer was a shockingly (at the time) hoppy pale ale. That beer became a hit. The brewery of course is Sierra Nevada one of the pioneers in the craft beer movement and one that has made it through the good times and bad times of the movement with success. 30 years in the craft beer industry is just flat out amazing and is worthy of a grand celebration. In honor of their great birthday, SN is not releasing just one beer this year, instead they'll be releasing 4 different ones the first three collaborations or homages to other craft brewery pioneers. The four are as follows:
Fritz and Ken Ale: A beer guest brewed with Anchor Brewing owner Fritz Maytag, a strong stout. Release: Out Now.
Charlie, Fred, and Ken's Lager: Brewed with Home Brew pioneer and AHA founder Charlie Papazian, and beer writer Fred Eckhart, this one is an Imperial Helles Lager. Release Mid-May
Jack and Ken's Ale: Guest brewed with Jack McAuliffe the original craft brewer. Jack started New Albion largely credited as the first microbrewery in the country, unfortunately that brewery closed in 1982 but his legacy continues to live on. This beer is an American Barleywine brewed with 100% Cascade hops. Release: Mid July.
Brewers Oak-Aged Reserve: This one is a blend of SN's Pale Ale, Oak Aged Bigfoot, and Celebration a 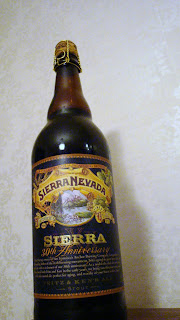 nd then dry hopped. Release: Mid-Oct.
The Beer: This stout weighs in at 9.2% and pours a deep dark black with a thick dense tan head of foam. The nose is of coffee, slightly burnt roasted malts, raisins, some alcohol, licorice. The mouthfeel is thick and creamy, almost syrupy, viscous. Notes of coffee, dark chocolate, licorice, raisins, figs, memories of dark chocolate covered espresso beans come to mind. Very little alcohol. My wife plants a small scoop of chocolate/chocolate chunk in to the last bit of beer in her glass and it seems a match made in heaven its so rich.
The beer IS rich, syrupy, but bitter with dark coco nib flavor. A delicious beer and worthy of celebrating this fine brewery. This one gets an A from me. Here's what the folks at BA think.
Posted by Barleyvine at 6:54 AM