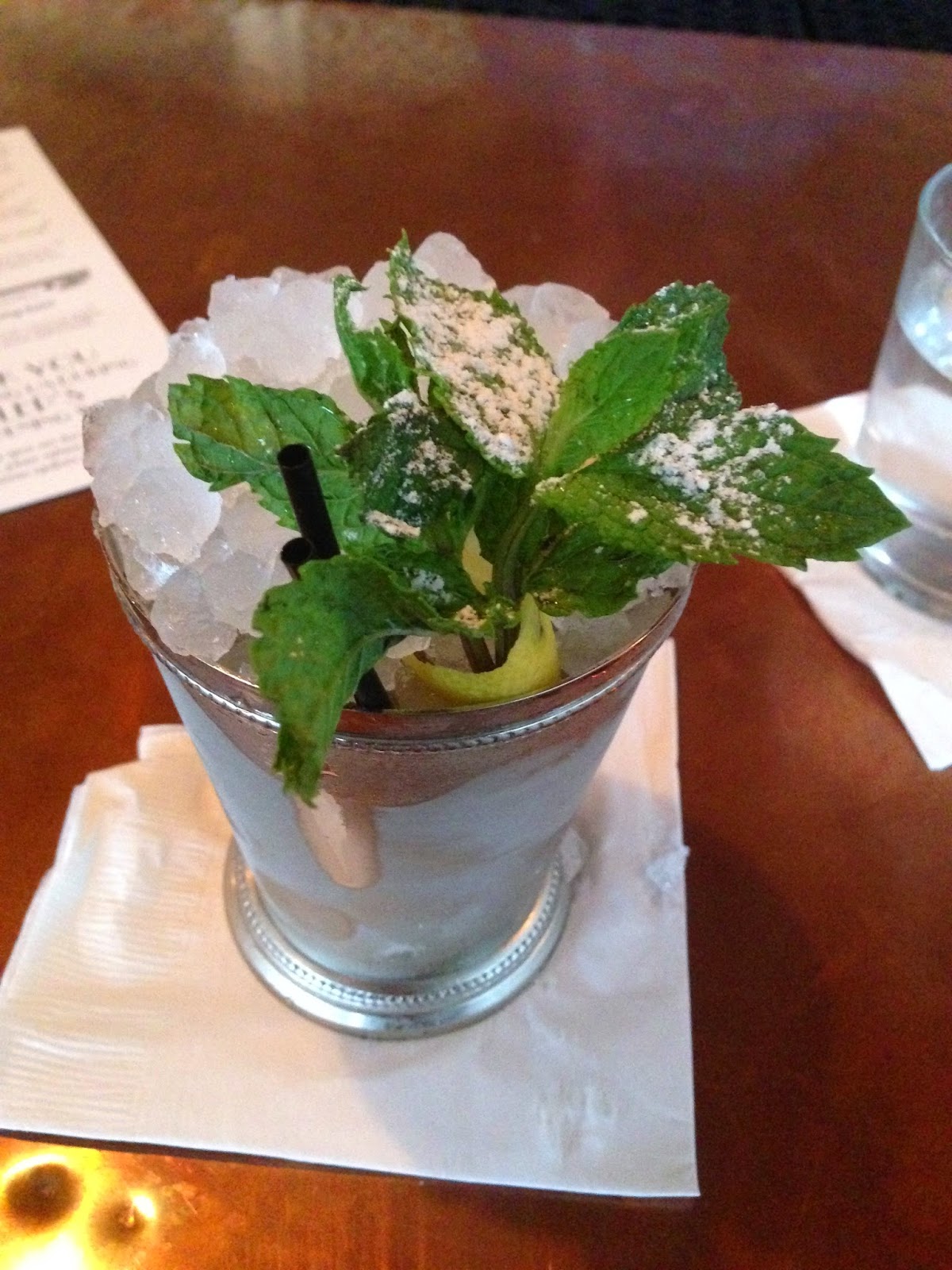 One of the most talked about and anticipated cocktail bars of recent memory has got to be newly opened Julep on Washington Avenue.  Julep is the brainchild of the Clumsy Butcher group, the folks behind Anvil, Pastry War, Blacksmith, Hay Merchant, among others.  However, this is really the baby of bartender extradonaire Alba Huerta who has been around the Houston cocktail scene for a few years now.  She helped Bobby Heugel with Pastry War, but as you can tell when you walk into Julep, this is definitely hers.  People have been eagerly anticipating the opening of Julep since it's announcement last year.  However, as with most things, getting the bar ready to open didn't go as planned.  But, they didn't just sit around waiting for things to happen.  Once the bar was built out, and they were just waiting on the city inspections to get finalized, Alba and company were able to use the time to train the staff.  The time and effort that they have taken in training and educating the staff is seen in every aspect of the service. 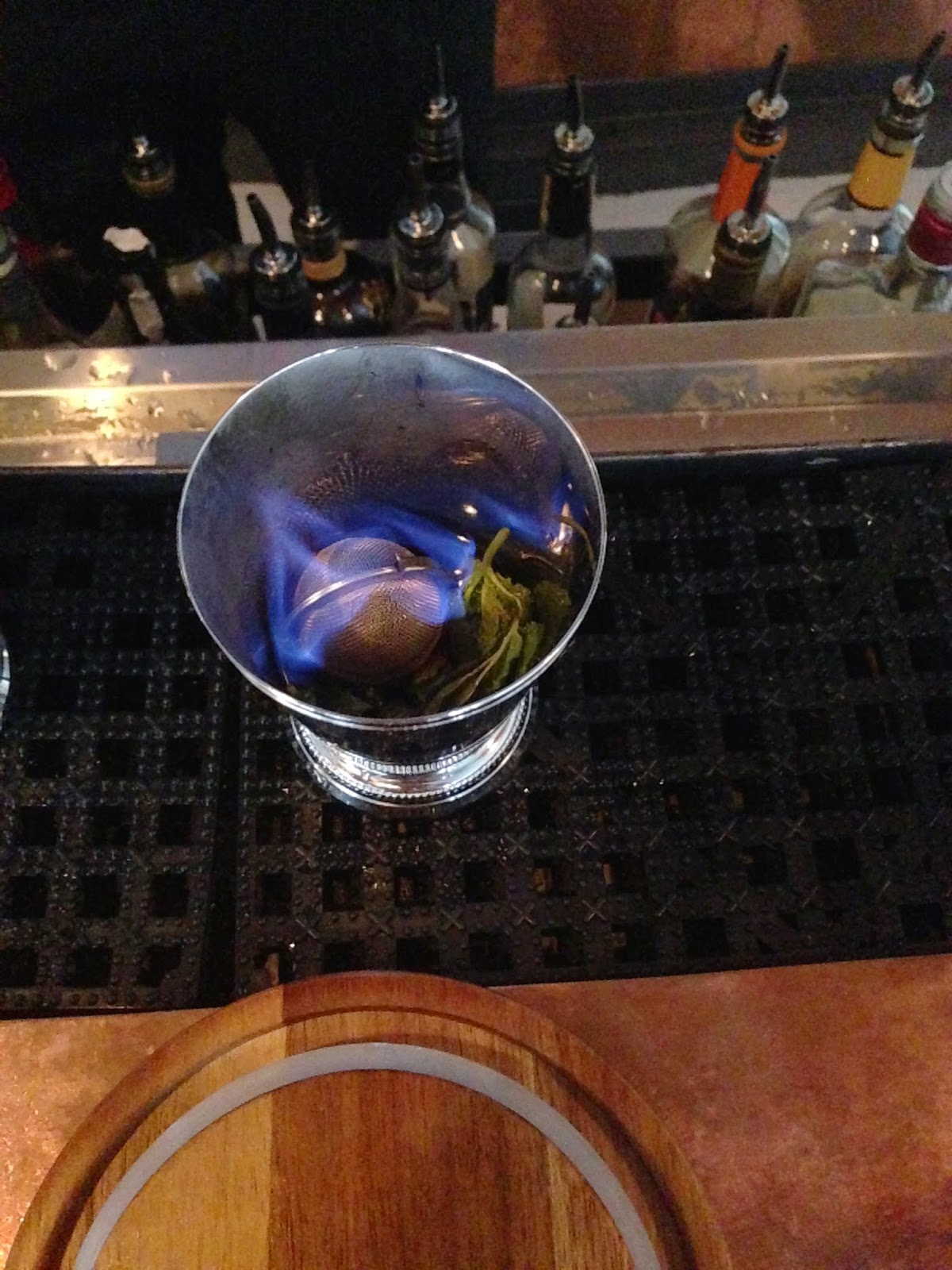 When you walk inside you notice a few things off the bat: lots of white walls, lace over the windows, lots, and lots of copper.  My first impression, was one of walking into an old Southern kitchen.  A kitchen that is with a lot of booze.
I must say, that in the short time it's been open, I've really fallen in love with this place from a cocktail perspective.  Well a cocktail and food perspective really. As one would expect, the cocktails are all top notch, many with liquor infusions, interesting herbs and spices, or fun takes on classics.  My personal favorite in the latter category is the spiced Julep.  This drink is made by dropping a tea strainer that has been filled with spices, and soaking in bourbon, lighting it on fire, and dropping it into a Julep cup full of the traditional julep ingredients, and then topping it off with a mound of ice.  A showy drink to be sure, but one that tastes amazing with the spices really playing off the bourbon, mint and sugar of the traditional mint julep.  My favorite on the former is probably the Cherry Bounce Sour, made with cherry bounce (a cherry infused liquor), Old Grand Dad, lemon, turbinado, angostura bitters, and egg white.   Truly an exquisite drink. 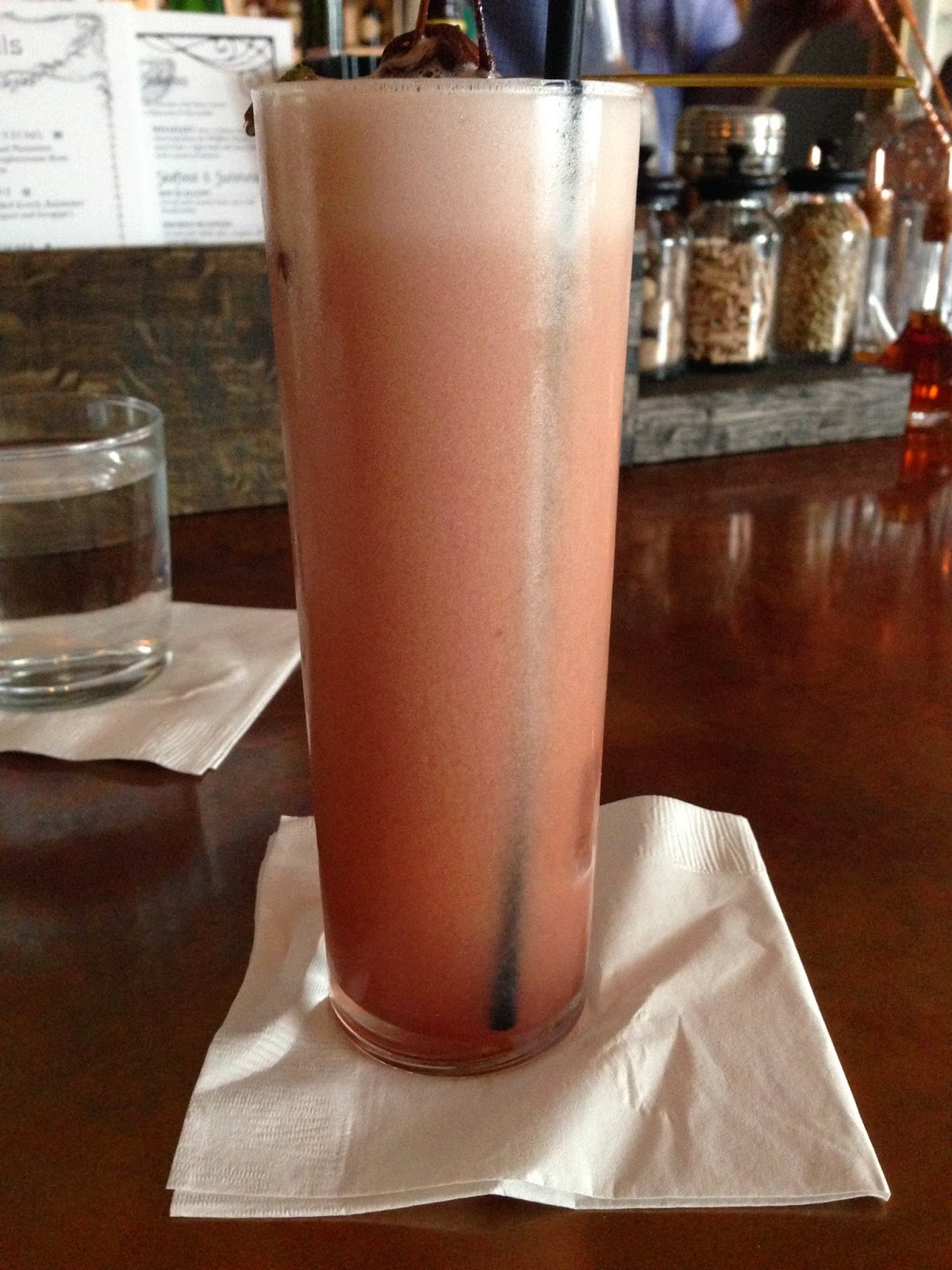 Make no mistake, while, the cocktails reign supreme, the food is a must try as well.  Unlike other cocktail bars, Julep has a focus on seafood, especially cold servings, so you will see oysters from around the country being served (hopefully some good gulf oysters in a couple of months will show up on the menu), along with smoked trout, smoked salmon and very uniquely, full caviar service.  These are all reasonably priced options, well with the exception of the caviar which runs about $120.00.  However, as good as some of these are, none of them are my favorite on the menu.  That falls to the simple, but wonderful, hush puppies.  For $4 you get a small plate of crispy on the outside, still moist, on the inside, hushpuppies served with a serrano aoli.  The aoli is OK, and maybe the one inconsistency I've noticed. One visit it had no apparent kick, the next, there was just enough heat to keep me interested.  But honestly?  The hushpuppies were perfect by themselves.

Behind the bar is plenty of small batch liquors, a great line up of bourbons, whiskeys and ryes including more of the cult bourbon Pappy Van Winkle than I think I have ever seen in one place.  There is also gins, rums, etc to balance things out.  One of the things that I've appreciated is that I've been able to get some really good old fashions, by just asking a bartender to surprise me with something at the mid level price point (they've hit the price point perfectly both times I've done this, which hasn't necessarily been the case at other places).
Lastly, Julep has a small but interesting wine menu, and promises a draft beer menu soon, but honestly, you aren't going for beer or wine, your going there for the cocktails.

So, sit at the bar, watch the bartenders meticulously make each drink, don't be afraid to ask what a strange ingredient may be, you may get a taste, at the very least, they will be more than happy to talk to you about what they are making, and what's in each cocktail.  That really may be why I enjoy this place so much, so that everyone I have met so far at Julep, is passionate about making good drinks, does it well, and also takes the time to talk to customers, educating them as well.
Posted by Barleyvine at 7:54 PM