It seems that there is a new place opening up every day in Houston, touting itself as the next "Great Craft Beer bar."  That title belongs to only a few in this city, but when one does open up I want to go check it out.  And so it was, that after hearing both good things and bad, that I went into Revelry on Richmond this last week.  I had heard rumors of frozen Red Bull and Vodkas, and sports bar, and bro-bar, etc, none of these things say 'Best Craft Beer bar' to me, but I wanted to see things first hand.
I'll be honest, I didn't expect much when I went there, and my expectations lowered even more when I got to the parking lot, and saw all the empty spots blocked by cones....mandatory valet....one of my pet peeves.  Alas, I found one spot that wasn't blocked by a cone, parked and headed inside.  Once inside, I found the space dominated by a giant U-shaped bar, with a slew of other tables to one side.  TV's all around the joint, which is fine, I love a good beer bar that can second as a good sports bar.  I took a seat at the bar, and perused the menu.
First, non beer stuff.  They have by the looks of the menu a pretty solid cocktail program (I didn't order one so I can't speak to how well they are made), good level of spirits and liquors.  The food menu also looked interesting, grouped by appetizers, salads, burgers, and other things like pot roasts, pork tacos, etc.  All of them looked really good.
My first order of business though, was to get a beer, and I did, Franconia Lager.  Its early evening, and I want something light and crisp.  Also you can never go wrong ordering  german style beer from McKinney's own Franconia Brewery.   The beer was served in a  shaker pint, clean of any residue (you can't imagine the number of places I've been too where the glasses aren't clean).  So no issues with the beer.  The staff itself seems relatively knowledgeable, in fact one staff person is going for their cicerone, (I think there are only 4 in all of Houston).  Additionally, the staff seems eager to recommend something and as all good beer bars should, willing to let you sample anything that is on the tap wall.  There are 40 taps, with a good sprinkling of Texas beers.  The night I went, there wasn't anything incredibly rare, but there were a few sours, IPA's, porters, and stouts.  A pretty good mix actually.  My one complaint with the beer list?  No cask. 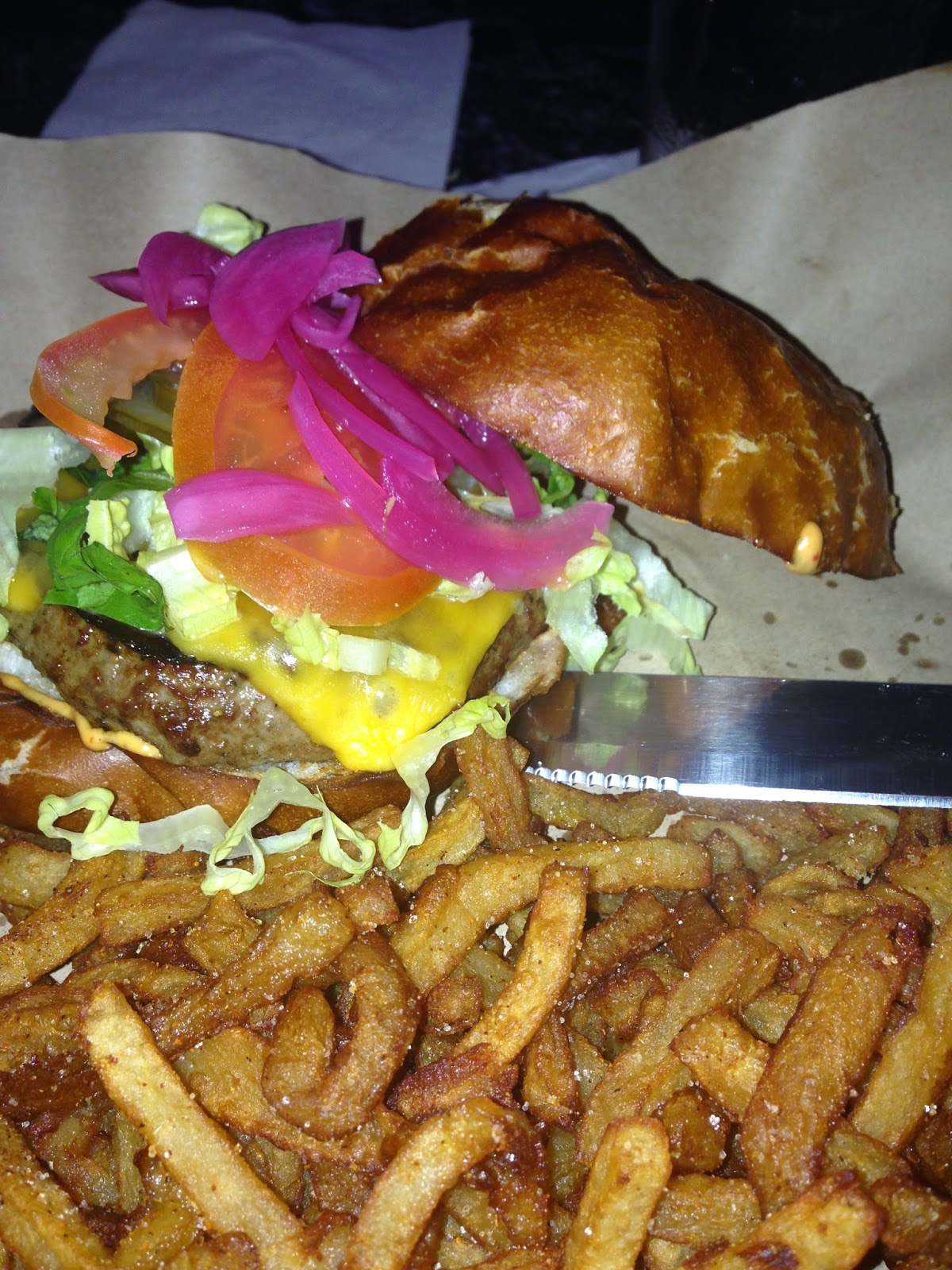 Onto the food.  I ordered an appetizer of fried pickled jalepenos.  Let me tell you, this is the perfect bar snack.  Salty, tart, spicy, crunchy, all it does is make you thirsty for more beer.  Plus it came with a cilantro yuzu dipping sauce.  All in all this was a really really good appetizer.  For dinner I ordered their regular burger which came with house pickled onions, pickles, and a pretzel bun.  The meat was cooked perfectly with a nice amount of pink in the middle.  The pretzel bun contained most of the juices so it tended not to run down my hands.  Really well made burger.  I was a little disappointed in the fries however.  They were seasoned nicely, with a good balance of salt and pepper, but they were a bit mushy and limp for my preferences.
I enjoyed the atmosphere of the place, a mix of folks that already seem to be regulars at this joint that is only today celebrating its grand opening, and young people on dates, and folks like me just popping in for a beer or bite to eat.  I can imagine this place will be packed come football season, and rightfully so with well priced beer and decent (not great) food prices.  Which is really one of my few complaints, the food prices can vary from OK, to downright ridiculously high.  Yes they are large plates over all, but I can think that they could knock a dollar or two off of some items and it would make it more palatable in my mind.  The beer prices though seemed spot on.
One of their biggest attributes has to be their staff.  They seem incredibly passionate about beer, and all they do, eager to help, and I received great service.  I watched other tables, and saw great service as well.
I'll be back again, even if I have to deal with the mandatory valet, it's worth it for the good food, good beer, and good sports that are on TV.  Revelry is a good addition to that neighborhood, and I imagine with all the new apartments, and townhouses going in, it will end up being a great joint for those living there to walk to.
As hesitant as I was when I walked into the place, and it's by no means perfect, I give it a thumbs up, and will continue to watch and see how it evolves.  Does it take a step up and truly become what it wants to be, or does it slide down to be a neighborhood 'bro-bar'.  Time will tell and I hope it steps up to its potential.
Posted by Barleyvine at 9:05 PM