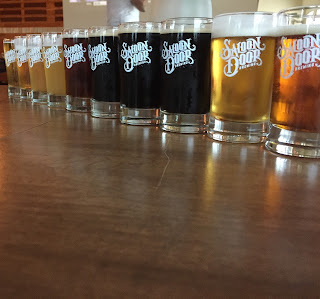 Anticipation.  That's what I've been feeling ever since I saw the first Facebook post for a new brewery in Webster.  Initially called Southern Draw, its since been changed to Saloon Door and it has softly, but not quietly (more on that in a moment) opened its doors and started serving some delicious brews.  I can not tell you how excited I was for the first brewery to open up on Webster, which is very close to where I live.

Saloon Door is nestled in a newly constructed area of warehouses near the end of the NASA bypass and I-45.  Recently they opened their doors on Fridays, Saturdays and Sundays as they prepared for their upcoming Grand opening.  I've made two trips there recently. 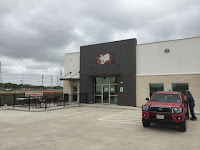 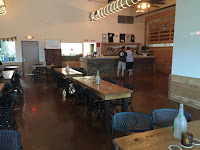 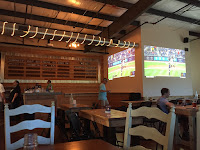 The outside looks like a typical warehouse, except for the small patio with tables, chairs and umbrellas. Once inside I was impressed by how big and open the area is with projector screens showing the Astros, I can tell this is going to be a place to hang out on Sundays and watch football.  I made my way to the bar and looked up at the wall to see all the different plaques with their different beers.  They typically have about 10-11 beers on tap that range from two different cream ales, two different wheat ales, an amber, pale ale, IPA, to three different stouts.  Since I had brought someone with me I decided to do a tasting of all their beers.  What impressed me the most after tasting all of them was that there were no off flavors.  Many times with young breweries, you'll find a beer, maybe two that they offer, that just don't taste right.  This is usually indicative of someone that isn't used to brewing on bigger equipment, and/or that particular set up.  This was definitely not the case with Saloon Door.  All the beers I had were very solid, with a couple of standouts including their stouts (all three on nitro), their vanilla cream ale was very good too.  Overall I was impressed by what they were putting out considering they haven't even had their grand opening yet.  I feel as they dial things in a little more they will be producing some really good beers.  As we sat at our table moving through the tasting I saw the room fill up with fellow beer drinkers sitting at one of the mismatched tables that are scattered around.  All were smiling and talking amongst themselves enjoying the atmosphere and the good beer.  It is evident that even during this soft opening phase Saloon Door has become a good place to hang out.
The second time I went, I brought my daughter since it looked pretty kid friendly the first time I was there, plus I wanted to try some of the food they are providing, and I'd heard their double IPA was on tap, something that I had missed before.  Honestly the food was OK, brisket sandwich with potato salad and green beans.  The sandwich was fine, the potato salad was wonderfully mustard-y.  The DIPA was again very very solid.  A little tweaking and it could be wonderful.  Hoppy, resiny, and it hid the 9.5% very well.
The kid enjoyed the free wifi, and peanut butter pretzels as well as bites of my potato salad and green beans.  There are card and board games lined up along the side windows that are fun to play as well.
Overall, I think Saloon Door is doing an amazing job of positioning themselves as a place for families to hang out, watch sports on TV and drink some really good beer.
I would be remiss if I didn't mention that this weekend starting, April 29th is Saloon Door's grand opening.  There will be lots of beers on tap and food available as well so be sure to stop by and support them if you can.
Posted by Barleyvine at 8:41 AM