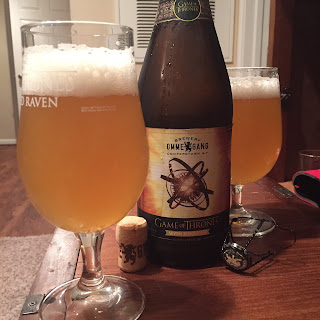 I'm a sucker for a beer that has a tie into pop culture.  I can't turn down a nice tasty Brothers Thelonious from North Coast, or a Bitches Brew from Dogfish Head.  There are many of these type of beers, most tying into music.  However, American brewery Ommegang (owned by Belgian brewery Duvel) has made a line up beers tying into the hit HBO TV series Game of Thrones, a show I'm a huge fan of.  I was out of town last week for the season premier, and didn't sit down to watch it until yesterday, figuring I would do a double header of watching the premier, and then yesterday's show live.  What better beer to drink with a GOT doubleheader than one that ties into the show.
All of these Game Of Thrones beers are a different style, this particular one is a Hoppy Wheat Ale that weighs in at 6.9%.  It pours a cloudy hazy pale straw yellow capped by a half inch head of white frothy foam.  The nose is lemony, biscuits, pale malts, yeasty bready dough.  The mouth feel is bubbly, effervescent, almost tingly.  The taste is of lemon, marmalade, biscuits, lightly toasted bread, yeasty esters.  There's a bitterness, it lies like a film on the tongue.  Some notes of orange peel as it warms, citrus resiny notes grow as well with the warmth.  A nice wheat beer.  Fairly easy drinking, light bodied, but with quite a bit of flavor and a nice hoppy bite as well.  A good beer, that paired well with two amazing episodes of Game of Thrones.
Posted by Barleyvine at 8:12 PM