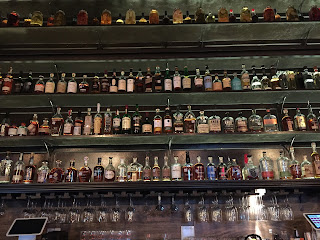 For a few years now the Clear Lake area has been doing some pretty exciting things with respect to craft beer.  For my money CLC has one of the best craft beer bars in the Houston area with Nobi Pub.  Add stalwart Boondoggles and other new comers like J. Henry's and Skallywags, CLC has done pretty well for itself with craft beer.  Unfortunately that's not the case with cocktails.  CLC is pretty much a cocktail desert. There are hardly any places to get a well made craft cocktail. Sure there are places to get margaritas, and flavored martini, but I'm talking about a place that can serve great classic cocktails.  That just hasn't existed.  Until now.  Preamble is the first of quite a few new cocktail bars that will be opening up over the course of the next few months in the CLC area.  Preamble's location is a little surprising, located across from the Cinemark, in a shopping center that hasn't seen a lot of love.  The slot Preamble has filled actually belonged to a Daiquiri shop.  Walking in, you immediately know that this place is as far away from the previous tenant as it can be.  There is lots of stone and brick walls, steel, glass.  Modern, but comfortable, with a corner filled with couch's.  The back wall is filled with glass shelves full of a really strong selection of various spirits.
The bar itself has enough for a few bartenders to work, and there is a handful of taps on the wall, all Houston area selections. 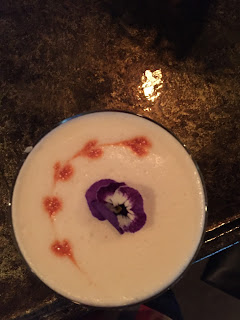 I spent a couple visits sitting at the bar, talking to the bartenders and even the owner, trying to understand what their vision is for this place.  They are truly passionate about craft cocktails and bringing that to CLC.  They want to cater to the community, will be offering a food menu in the future (from the looks of things, the area for the kitchen looks like a decent size), as well as classes focusing on various different spirits which I think is a really good idea.  Of course I didn't just go to the bar to talk, I came to drink, and I have to say overall I was pleasantly surprised.  They have put together a small menu of cocktails right now, and as they train their staff (more on that in a bit) they'll expand the menu, but they want their bartenders to be proficient in what they have on the menu first.  I had a few different cocktails, including a Boulvardier which is my go to drink at a new bar to see how they make it, i wasn't disappointed in this well made version.  Other drinks like the bees knees were amazingly presented, and tasty as well.  I was impressed by the speed, consistency, taste, and presentation of all the cocktails I had.  While they have a small standard menu, when the head bartender is around you can pretty much ask for anything and he'll make it.  Speaking of which, the owner brought Carlo, the head bartender, down from Dallas where he worked at a top cocktail bar.  Carlo is a great bartender, makes great drinks, has a wealth of information, interacts very well with the customers, and is always willing to make a suggestion on something to drink. 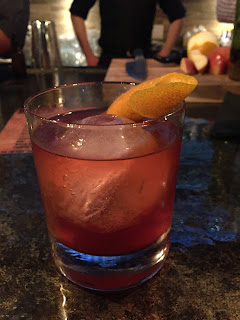 However, there are some things that can be worrisome.  Primarily, lack of bartending depth.  If Carlo is there, you are assured of getting a good drink.  If he isn't?  It can be a crapshoot.  They are having some difficulty getting good bartenders, that can make good drinks consistently.  Being a bartender at a craft cocktail spot isn't necessarily like working at Chili's.  Not that someone can't go from that to Preamble, but it's not an easy transition, and I think Preamble is struggling with that.  Additionally, I think the cost of some of their cocktails can be a little high outside of happy hour.  Some of the prices for their cocktails can be 1 or even 2 dollars higher than cocktail bars downtown.  I think there will need to be an adjustment on the price over time.
Overall, though, I'm extremely excited for a place like Preamble in Clear Lake.  I think this is a place that is much needed in the area and they are already doing some great business.  I'm excited to see where they go, what the food menu looks like, what the expanded cocktail menu develops into, and all the other plans they have.  I'm always rooting for folks that have a deep passion for food and or drink, doing good things in the right way, and the folks behind Preamble are one of those people.
Posted by Barleyvine at 8:34 PM