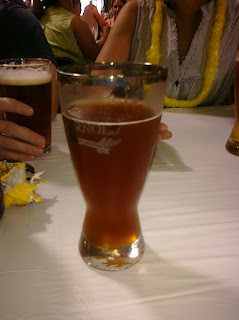 Yesterday was the 15th Anniversary of Saint Arnold's. 15 years is quite an accomplishment, especially in Texas. Owning a Microbrewery in this state is not the easiest thing to do, but Brock and Co have done it, and done it well. The party started at 1 pm, when everyone was allowed through the doors and handed a very nice special anniversary glass. After walking around for a bit, they finally opened up the tap lines and lo and behold I saw a new beer, something labled Brown Lager. I curiously asked a Saint Arnold's volunteer what this beer was. Basically its their Brown Ale made with Lager Yeast. An interesting beer (see pic at the right). You get the nice sweet caramelly malt taste, with more crispness and less fruitiness. Also some great BBQ was served by Good Co. They also hosted the Beer Olympics, a series of events like rolling kegs, pouring beer from up high to your teammate below who had a pitcher on their head, etc. It was really a fun time, and I hope Saint Arnold's has 15 more (at least!).

Finally a pic of Brock giving the 15th Anniversary Toast: 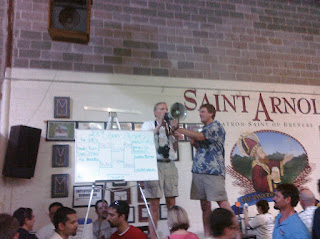 Posted by Barleyvine at 6:40 AM